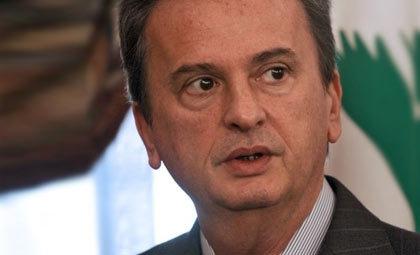 Central Bank Governor Riad Salameh on Monday denied telling CNN that Lebanon’s economy will collapse in a matter of days if the protests continue while noting that a “solution” to the crisis is needed within days in order to restore confidence and avoid a collapse.

Salameh noted that a CNN headline did not accurately reflect what he said in an interview with the TV network.

In the interview with CNN broadcast Monday, the governor was asked how much longer the country could avert economic collapse, given its dwindling foreign reserves.

“It’s a matter of days, because the cost is heavy on the country, but more important, we’re losing every day confidence,” Salameh said. “Finance and economy, it’s all about confidence.”

Long before the protests began, Lebanon’s economy was already suffering from a massive budget deficit and rising unemployment. Its debt ratio of $86 billion is one of the highest in the world, accounting for more than 150% of its gross domestic product.

The protesters blame the economic crisis on political leaders from various religious sects and factions who have dominated the country since the civil war. They say the sectarian power-sharing arrangement that ended the war has spawned networks of corruption, patronage and nepotism that have depleted the treasury and gutted public services.

Thirty years after the end of the war, power outages are still frequent, the water supply is unreliable and trash goes uncollected in many areas.