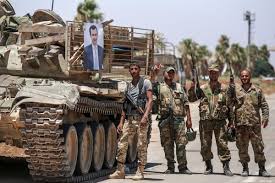 TEHRAN (FNA)- The Syrian Army continued its deployment to the West of Hasaka province, where the US-backed Kurdish militias had retreated from, and took full control over a vast chunk of Aleppo-Hasaka highway.

The Syrian Army units reinforced their control of the villages of Um Harmaleh, Bab al-Kheir, Um Ashabeh and al-Assadiyeh in the Southeastern outskirts of the city of Ra’as al-Ein and reduced their distance from Turkish borders to three kilometers. Ra’as al-Ein is located in Northern Syria and near the borders with Turkey.

The Arabic-language al-Watan newspaper reported that the Syrian Army in its biggest deployment operation in Eastern Euphrates and in efforts aimed at securing Aleppo-Hasaka highway (M4 highway) took control of the vast portion of the road which connects Tal al-Tamr in Hasaka to Ein Issa and then to Ein Al-Arab (Kobani).

Meantime, the Syrian Army continued its deployment to Northwestern Hasaka and regained control of many villages there.

In a relevant development on Sunday, the Syrian army units expanded deployment in the Northern parts of Hasaka province as government forces moved from Qamishli near the Turkish borders to the Northwestern side of Hasaka.

Amid a warm welcome by people, Syrian forces entered Um al-Keif village on Tel Tamar-Ras al-Ein road to face the Turkish aggression and protect civilians from any attack by Ankara-backed militants.

Several military vehicles carrying army soldiers moved on Friday afternoon from Qamishli city to be deployed in the Western countryside of Hasaka to face Turkish assault and protect the people.

Government forces have deployed several units to the Turkish border during the past week, and promised to reinforce their troops in the next few days.

The Kurds had struck an agreement with the Syrian government in a move to be shielded against the Turkish onslaught. The agreement envisages the dispatch of Syrian government troops to the Kurdish-held territories to receive control and block the incursion of the Turkish Army and its allied militants. The Kurdish militias have already delivered control over a number of towns and villages to the Damascus army, including Manbij, Raqqa, and Ein Al-Arab.

Meanwhile, Russian military police forces have begun patrolling Qamishli city towards the border with Turkey. Commander of the Qamishli-based military police unit Ivan Volgin told reporters that a Russian military police convoy has patrolled the area along the Syrian-Turkish border near Qamishli, the largest city in Northeastern Syria. The total length of the route, which included the nearest border checkpoint, exceeded 200 kilometers roundtrip.

Around 300 Russian military police have been deployed to Syria from Chechnya – in Russia’s North Caucasus – to facilitate the withdrawal of Kurdish units from the Syrian border and carry out peacekeeping patrols.

The Russian Defense Ministry announced Friday the new units arrived to back up the existing military police contingent in Syria, stating that the group of highly-skilled and experienced servicemen will carry out “special tasks” in support of the deal struck between Russian President Vladimir Putin and his Turkish counterpart, Recep Tayyip Erdogan.

Under the deal agreed by Putin and Erdogan on Tuesday after marathon talks in Sochi, the Turkish offensive that threatened to destabilize the war-torn country even further has been contained to an area up to 32km inside Syria. It was agreed that the territory not affected by the offensive would be jointly patrolled by Turkish and Russian servicemen, while Moscow volunteered to assist in the withdrawal of Kurdish fighters who found themselves at the mercy of the Turkish Army after their American allies hastily withdrew from the area days before the large-scale offensive kicked off.

Moscow stated that it’s up to the Kurds to hold their end of the bargain, warning that if the militias fail to pull out and withdraw their weapons, Russia and Syria would not be able to shield them from Ankara’s onslaught.

On Saturday, Turkey’s Defense Minister Hulusi Akar stated that Ankara’s deal with Moscow on the withdrawal of Kurdish militants from Northern Syria is right on track, noting, “Everything is normal, and [the deal] is going as planned.”