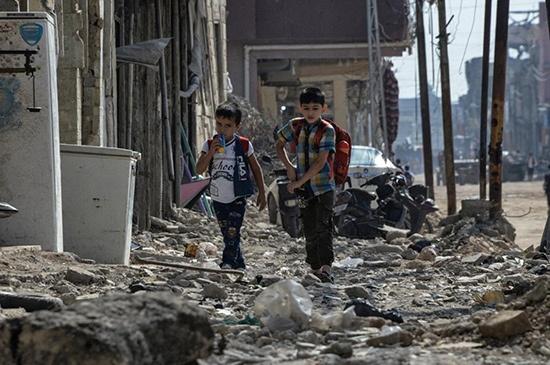 While some young Iraqis tell MEE that the IS leader’s end is a moment of relief, others say it is merely an election ploy by the US president and fear the militant group’s return.

For Iraqis like Atheer Nazar Saadallah, the death of Islamic State (IS) leader Abu Bakr al-Baghdadi during a US special forces operation in Syria this weekend, brought a sense of relief and celebration.

From a mosque in Saadallah’s hometown of Mosul in July 2014, Baghdadi had declared the creation of his “caliphate”, setting off years of violence and destruction across Iraq and Syria and beyond, wrought by the group.

Early this year, the group’s territory had been whittled down to the eastern Syrian town of Baghouz where thousands of IS fighters surrendered in March and the group was declared defeated.

But Baghdadi had remained elusive – until Saturday night when, according to US President Donald Trump, he was chased down a dead-end tunnel “screaming, crying and whimpering” before he set off an explosive belt, killing himself and three children with him.

Saadallah, a 24-year-old university student, told Middle East Eye that his death was “a great accomplishment for me and for all Iraqis”.

“His death brought some closure for all the families that suffered from IS’ brutality and it brought an end to an extremely dark era of darkness and fear,” he said.

“I felt that finally, this dark era of these religious extremists has come to an end. I felt happy for all the victims of IS because their suffering has finally ended.”

Saadallah, whose city was left with large patches of ruins, said it is always possible that IS might return and conceded that the US and its 2003 invasion of Iraq had certainly played a role in the group’s rise.

“But the truth must be told, the US played the greatest role in stopping the expansion of IS and in their extermination, especially by assassinating their leaders,” he said.

However, Mustafa Alkattan, a 23-year-old activist who is also from Mosul, said Baghdadi’s death is merely a campaign ploy by Trump ahead of the 2020 elections.

“America and its allies created al-Baghdadi and today, they killed him,” he told MEE.

Islamic State: From Iraqi insurgency to death of Baghdadi

2011: The group’s leader, Abu Bakr al-Baghdadi, sends operatives to Syria to set up a subsidiary of the group. Baghdadi follows in 2013, breaking with al-Qaeda and renaming his group the Islamic State in Iraq and the Levant.

2014: Its sudden success begins with the seizure of Fallujah in Iraq and Raqqa in Syria. Mosul and Tikrit follow. Baghdadi renames the group Islamic State and declares a “caliphate”. Raqqa and Mosul become IS’s two de-facto capitals.

US warplanes strike IS positions in northern Iraq, and Washington forms a coalition of more than 70 countries to fight the group, spearheaded on the ground in Iraq by Iraqi government forces, Iran-backed militia groups and Kurdish peshmerga fighters, and in Syria by the Kurdish-led Syrian Democratic Forces. The offensive halts IS’s momentum.

2015: Militants in Paris attack a satirical newspaper and a kosher supermarket, the bloody start to a global wave of attacks where IS claims responsibility. Fighters in Libya behead Christians and pledge allegiance to IS, followed by groups in other countries, but they stay operationally independent.

2016: The defeat against IS starts to take shape with winning offensives in Fallujah in Iraq and Manbij in Syria.

2017: IS suffers a year of catastrophic defeats, losing Mosul in Iraq, and Raqqa and Deir Ezzor in Syria.

2018: The Syrian government retakes IS enclaves in Yarmouk, south of Damascus, and on the frontier with the Israeli-occupied Golan Heights.

2019: IS fighters are defeated at their last enclave on the Euphrates in the village of Baghouz. The SDF declares the “caliphate” eliminated. In a video, Baghdadi acknowledges defeat in Baghouz while threatening “revenge” attacks.

On 27 October, US President Donald Trump announces the death of Baghdadi in a raid by US special forces soldiers in Idlib in northwestern Syria.

Alkattan said he was sure that IS’ days were numbered when the group was kicked out of Mosul in 2017, but was relieved to see Baghdadi gone forever, despite Trump’s motivations.

“I was having a hope that Baghdadi will be killed, sooner or later, and now I am so happy and excited by his death, the one who killed our families, killed our future and our dreams,” he said.

“Does the US have al-Baghdadi’s DNA?” he asked. “From time to time, America creates something for the glory and good reputation of America.

“However, the American elections are coming soon, and Trump announced this fake news to collect more votes in his balance to win the presidential election again.”

Even if Baghdadi is dead, his ideology will live on, Albadawi said.

“IS and al-Qaeda are characterised by leadership decentralisation. If a leader has gone, another will replace him,” he said.

“Killing Baghdadi is not important for me. What is important is ending his ideology. As long as IS’s ideology still exists, another Baghdadi and Osama bin Laden will be born.”

Dhyiaa Monem, a 22-year-old living in Baghdad, said he and other Iraqis were happy to hear the news about Baghdadi.

“They were behind the killing of thousands of Iraqis and destroying one-third of Iraq’s infrastructure, and looting Iraq’s wealth,” he said.

“The Iraqi government has to do its best to strengthen the Iraqi security forces to fight extremism and build what IS destroyed, and also get rid of sleeper cells in liberated areas,” Monem added.

Still, Awab Ayoob, 24, a journalist from Diyala, said he’s not sure it will be possible to prevent IS from rising once again.

“IS is impossible to finish while there are conflicts and wars in the region,” he said.

The greatest danger, Ayoob said, was not Baghdadi, but those he left behind.

“We are still afraid of IS families who are living at Iraq’s border,” he said. “IS’s footprints still exist, like thousands of Iraqi families still in camps, several cities ruined, and unsafe conditions, all that Baghdadi was behind.”