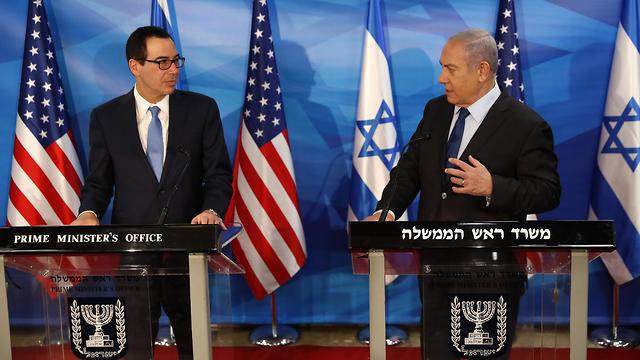 Treasury Secretary Steven Mnuchin said on Monday the United States would increase economic pressure on Iran over its nuclear programme, making the pledge during a Middle East trip that includes visits to U.S. allies Israel and Saudi Arabia.

Sanctions reimposed on Tehran by President Donald Trump after he withdrew the United States from world powers’ 2015 nuclear pact with Tehran have dried up Iranian oil revenues and cut Iranian banks  ties to the financial world.

Mnuchin, speaking in Jerusalem to reporters alongside Prime Minister Benjamin Netanyahu, who urged him to crank up pressure on Iran, offered no details on what new moves were in store.

“We have executed on a maximum pressure campaign for sanctions. They have worked, they are working, they are cutting off the money,” Mnuchin said.

He told Netanyahu: “We will continue to ramp up, more, more, more … I just came from a very productive working lunch with your team. They gave us a bunch of very specific ideas that we will be following up.”

Since leaving the nuclear deal last year, Washington has been trying to strangle Iran’s oil exports, the mainstay of its economy. The sanctions have dismantled part of former U.S. president Barack Obama’s legacy and upset U.S. allies who were party to the 2015 deal, which was designed to restrict Tehran’s pathway to a nuclear bomb in exchange for sanctions relief.

The Islamic Republic denies it is seeking nuclear weapons.

Netanyahu, who strongly opposed the 2015 nuclear deal, said Iran’s ability to develop weaponry that could threaten any country in the Middle East could be diminished by tightening sanctions.

“So I want to thank you for what you’ve been doing and encourage you, Steve, to do more – more, a lot more,” he said.