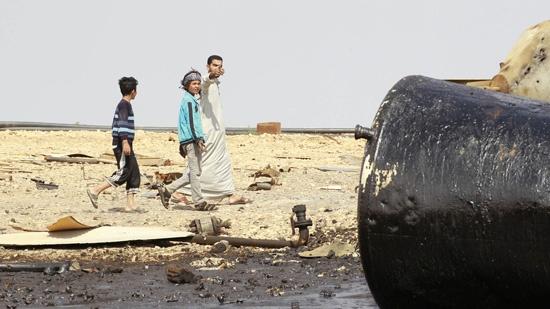 For all President Trump’s talk of withdrawal, and ending the US’ “endless wars” in the Middle East, America will remain in Syria to keep its oil in the hands of Washington’s favorite militias. Isn’t it time to just let go?

The killing of Islamic State (IS, formerly ISIS) leader Abu Bakr al-Baghdadi by American special forces on Saturday was undoubtedly a foreign policy triumph for Trump, deflecting the criticism that followed his withdrawal of troops from northern Syria and compounding his claim to have “obliterated his caliphate, 100 percent.”

But no sooner had Trump taken his victory lap than he told reporters he would be “leaving soldiers to secure the oil.” So much for bringing the boys home.

Defense Secretary Mark Esper confirmed the US’ new priority on Monday, telling reporters that US troops and armored vehicles are already en route to the oilfields of Deir ez-Zor, where they have been asked to “respond with overwhelming military force against any group” threatening them – including Russia and the Syrian government.

President Trump is a blunt speaker, and often practices publicly what other leaders would prefer remain hidden. On one hand, the decision to remain behind for the oil’s sake fits right in with Trump’s transactional view of international relations. After all, this is the same president who complained that his predecessor didn’t seize Iraqi oil fields as “reimbursement” for the 2003 invasion (‘we’ll invade them and they’ll pay us to do it’).

On the other, it bogs American troops down in a country he once referred to as “sand and death,” contradicting his oft-repeated promise to extricate the US from Syria and quit playing the world’s “policeman.”

But, if the oilfield mission is taken at face value, Washington isn’t even going to profit from the oil. Though Trump teased the prospect of getting American oil companies involved in its extraction, Esper on Monday claimed that the US will only ensure that the black gold remains in the hands of the Kurdish-led Syrian Democratic Forces (SDF), and out of the hands of IS.

Few would argue with keeping the oil in the hands of the Kurds, especially as the SDF have long assisted Washington in the fight against IS, and contributed intelligence to the raid on Baghdadi’s compound on Saturday. The oil guarantee could also be seen as compensation to the Kurds, following the US’ withdrawal that left them at the mercy of a Turkish military operation earlier this month.

Except Deir ez-Zor is Syrian land. The oil under the ground there is Syrian oil. And Syria, officially, remains under the rule of President Bashar Assad. The United States is not technically at war with Assad, its presence in Syria is not sanctioned by international law, and even if the US were leading an internationally recognized military campaign against Assad, seizing oil is not legal under the American definition of the ‘spoils of war.’

And to top it off, there’s no inkling that Islamic State, or what remains of the group, will even threaten the sites. Asked on Monday if the oilfields and their American protectors were under any threat, Esper replied “not at this time.”

Though Syria is not a major producer, oil sales accounted for a quarter of the state’s revenue and were projected to net the government $3.2 billion in 2010, before the outbreak of war. Now, with much of the country in ruins, oil sales could be a vital lifeline for the nation’s rebuilding. With the US denying everyone bar the Kurds access to at least some of this oil, that recovery is hampered.

The military defeat of IS and the violent death of its depraved leader have presented Trump with the perfect opportunity to make good on his campaign pledge to get out of the “bloodstained sand” of the Middle East. Endless war and occupation are the legacies of the Bush administration, and the preserve of war hawks like John Bolton and Lindsey Graham.

Time to declare mission accomplished and leave Syria to the Syrians.