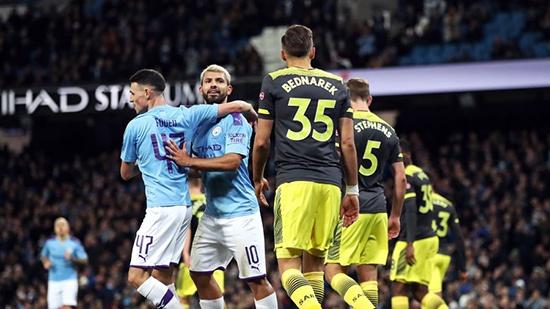 Sporting Life · Columnist
Our review of Tuesday’s round of 16 clashes in the Carabao Cup.

Colchester extended their run into the latter stages of the competition with a 3-1 win at Sky Bet League Two rivals Crawley.

Michael Luyambula’s own goal early in the second half gave Colchester the lead and Luke Gambin added their third.

Sunderland’s Will Grigg and Marc McNulty both failed to convert from the spot as Oxford won 4-2 on penalties after a 1-1 draw at the Kassam Stadium.

Oxford, who dumped West Ham out after winning 4-0 in the previous round, led at the break through Rob Hall’s effort before McNulty equalised for Sunderland with 12 minutes left.

James Henry, Anthony Forde, Tariqe Fosu-Henry and John Mousinho all converted in the shoot-out for Oxford, while Grigg blazed his spot kick off target and McNulty’s effort was saved.

Sergio Aguero marked his 350th Manchester City appearance with a brace as they cruised into the quarter-finals of the Carabao Cup with a 3-1 win over Southampton.

After fellow Argentina international Nicolas Otamendi headed City in front in the 20th minute, Aguero struck in either half to move on to 12 goals for the season.

Despite Jack Stephens’ late consolation goal, it was a pretty routine win against a Southampton side still reeling from Friday’s 9-0 home defeat to Leicester, but one City fans will remember as a famous name from their past emerged as the next youngster hoping to be part of the future.

Boss Pep Guardiola made nine changes to the City side that beat Aston Villa on Saturday, bringing in teenagers Phil Foden and Eric Garcia, but the most notable was a debut for 18-year-old Tommy Doyle.

The midfielder certainly has the pedigree with both his grandfathers – Mike Doyle and Glyn Pardoe – part of the City side that won the old First Division title in 1968, the FA Cup in 1969 and the League Cup in 1970.

Of course, times are different now and it is three years since City last lost a League Cup tie, winning the trophy in each of the past two seasons.

That record never looked like changing as City enjoyed 77 per cent possession and Southampton did not even manage a shot on target until the 65th minute.

There will be no repeat of Burton’s fairytale run to the semi-finals of the Carabao Cup this season after Leicester eventually proved too strong at the Pirelli Stadium.

The League One side claimed famous victories against Aston Villa, Burnley, Nottingham Forest and Middlesbrough en route to the last four of the competition during the 2018/19 campaign, but there was to be no more giant-killing on Tuesday night.

Burton, who added Bournemouth to their growing list of scalps in the previous round, did pull a goal back through Liam Boyce early in the second half after strikes from Kelechi Iheanacho and Youri Tielemans had given Leicester a two-goal cushion at half-time.

Brendan Rodgers’ team were put under some intense pressure in the second half but survived several difficult spells and sealed a place in the quarter-finals for the third year in a row when substitute James Maddison struck in the final minute.

Everton advance with Holgate and Richarlison on target

Everton advanced into the quarter-finals of the Carabao Cup as goals from Mason Holgate and Richarlison secured a 2-0 victory over Watford at Goodison Park.

Holgate headed home what was his first goal for the Toffees in the 72nd minute, and ex-Hornets man Richarlison fired past Heurelho Gomes in stoppage time.