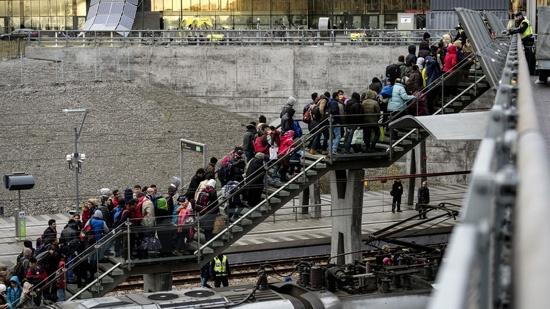 Sweden is beckoning even more migrants with a government website advertising its generous benefits system, while the former CEO of automaker Scania warns that a glut of foreigners is pushing the country toward civil war.

Sweden.se, a government-run website, entices migrants to make the journey north and details the benefits they can receive. Boasting the world’s longest parental leave (though most new arrivals from the Middle East and Africa remain unemployed), Sweden also offers free health and dental care to immigrants, as well as sizable child allowances – which the website calculates for a family with six children.

The site, operated by the Swedish Institute (SI), is available in four languages – English, Chinese, Russian, and Arabic. While the English version offers the usual tourism-industry listicles on “10 Swedish myths uncovered” and “20 things to know before moving to Sweden,” the Arabic version prominently features sections on benefits, acquiring work permits, and the rights of the child (including the right to education in their mother tongue).

Per-Arne Wikström, SI’s head of communications, defended Stockholm’s creation. “I have no problem with showing off that Sweden is a welfare country. We have a system that arouses interest,” he told TV4 on Monday as politicians eviscerated the site for enticing even more migrants – needy, yet internet-connected – into a country already overburdened with benefits-seekers.

Already, some 94 percent of migrants who came to Sweden in 2015 to seek asylum take state benefits, according to Swedish news outlet Aftonbladet, a situation which has nearly bankrupted municipalities like Bengtsfors and Filipstad. With almost 420,000 asylum seekers arriving in the country since 2011 – and a total of over 920,000 immigrants – the country, with less than 10 million inhabitants, is struggling to accommodate the new arrivals.

“What Sweden needs is quotas in the welfare system and a strict migration policy. For a long time to come,” Svantesson continued.

The cultural divide between native Swedes and new arrivals from the Middle East and Africa is too great to bridge in a single generation, former Scania CEO Leif Östling told Swedish outlet SwebbTV on Saturday. He warned that clashes between migrants and locals, which have already turned some areas into “no-go zones” where even the police fear to tread, could spiral into “internal wars” requiring the military to get involved.

The future is grim for Sweden’s economy, Östling continued, “and it’s because we’ve taken in far too many people from outside,” with no thought toward whether they would be able to assimilate and acclimatize to Sweden’s “incredibly complicated society.”

Those who come from the Middle East and Africa live in a society that we left almost a hundred years ago.

Many corporate executives share his views, Östling said, but they are afraid to speak up for fear of hurting their companies. Sweden has long had a reputation as a country that is welcoming to migrants, and its government appears determined to keep up that image.