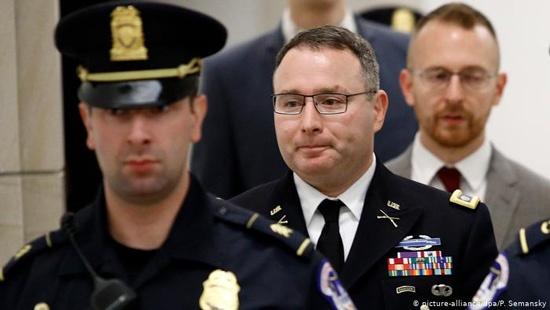 A military officer has testified that he heard and reported Donald Trump’s push for Ukraine to investigate presidential challenger Joe Biden. The House is now set to vote on the next steps in any impeachment proceedings.

Alexander Vindman, a former 20-year military officer who had served in Iraq and later as a diplomat, on Tuesday said he heard US President Donald Trump ask Ukraine’s president to investigate his potential 2020 rival Joe Biden.

Vindman, the first witness who claims to have heard Trump’s July 25 call with Volodymyr Zelenskiy to testify so far, said the conversation had so alarmed him that he reported the matter to lawyers for the National Security Council (NSC).

Democrats in the House of Representatives have investigated the call, in which Trump asked for a “favor” that investigators call a quid pro quo for $391 million (€350 million) in military aid that the US was withholding.

Trump also asked Zelenskiy to investigate a debunked conspiracy theory that Ukraine, not Russia, had interfered in the tainted 2016 US election.

Vindman served as director for European affairs and a Ukraine specialist under Fiona Hill, who testified previously and worked for John Bolton, who quit as national security adviser following disputes with Trump.

With the administration forbidding staff from testifying, Vindman, a  lieutenant colonel, is the first current official to comply with a subpoena.

“I did not think it was proper to demand that a foreign government investigate a US citizen,” Vindman said, according to the AP, “and I was worried about the implications for the US government’s support of Ukraine.”

The account contradicted that of Gordon Sondland, the US ambassador to the EU, who donated $1 million to Trump’s inauguration and said no NSC officials “ever expressed any concerns” and that he didn’t know Joe Biden’s son Hunter was employed by Ukrainian oil giant Burisma.

Vindman testified that he told Sondland that encouraging Ukraine’s government to investigate the Bidens and Burisma, which he said the ambassador did in a July 10 meeting, was “inappropriate.” It “had nothing to do with national security,” he said he told Sondland.

“I realized that if Ukraine pursued an investigation into the Bidens and Burisma, it would likely be interpreted as a partisan play which would undoubtedly result in Ukraine losing the bipartisan support it has thus far maintained,” Vindman said.

He added that he had tried to fill in the word “Burisma” which was omitted from the White House’s rough transcript of the telephone call.

“Burisma” is a reference to the company linked to Biden and his son, according to those familiar with his testimony, but Vindman was unsuccessful.

After interviewing 10 witnesses so far, Democrats said they could vote on rules for hearings and a public report on the inquiry as early as Thursday.

The Intelligence Committee would take open testimony, with Republicans able to call witnesses. Investigators would send the compiled evidence to the Judiciary Committee for review, with the White House given the opportunity to challenge it and present its own. Should impeachment pass, Trump would go on trial for removal in the Senate.

Trump’s Justice Department has opened a criminal investigation — into the FBI’s inquiry into Russia’s support for his 2016 campaign.