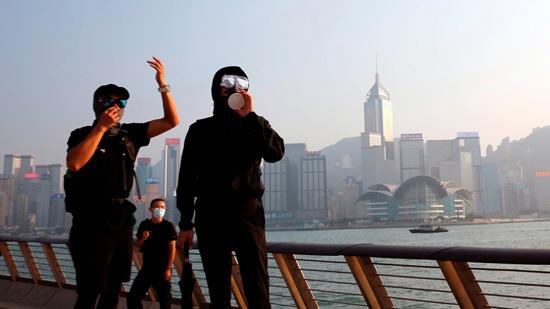 As Washington and Beijing continue to try to settle their differences over trade and to reach a partial agreement at least on that issue, recent US legislation on Hong Kong is likely to further anger China.

Earlier this month, the US House of Representatives passed the Hong Kong Human Rights and Democracy Act. The bill, which aims to “support the democratic aspirations of the people of Hong Kong,” challenges Beijing’s authority and questions the special status Hong Kong enjoys under China’s ‘one country, two systems’ principle, which allows it to have a separate legal and economic system from the mainland.

Hong Kong has been gripped with violent anti-government protests for months, which have plunged the city into chaos and hit its economy hard. While China has shown maximum restraint in dealing with the unrest, the US and some other Western countries have openly voiced support for the protests, triggering outrage in Beijing. China has reacted fiercely to any meddling in its domestic affairs, saying that it will not tolerate the “interference of external forces.”

If the US legislation gets further approval and is signed off by President Trump, it will require verification of Hong Kong’s special status as a separate legal and economic system from mainland China. It will enable the US to sanction individuals and will also open the possibility of export controls.

He noted that the bill is based on Washington’s assertion that Hong Kong’s autonomy is “a sham” and, therefore, the US should not treat it separately from China.

“The question is whether ‘One Country Two Systems’ has become a sham. The answer is, clearly not,” Leung stressed. He explained that, apart from its separate status under the WTO, Hong Kong has been recently recognized as one of the freest economies in the world, according to recent annual assessments from the Fraser Institute of Canada and the US-based Cato Institute.

Despite Beijing’s fierce reaction to any attempts to influence the situation in Hong Kong, the new legislation is not the worst thing that Washington has done to provoke its trade war rival, according to Sourabh Gupta, senior fellow at the Institute for China-America Studies. Thus, the issue is not going to derail the trade talks.

“Obviously the US and China are negotiating their trade agreement, which is a separate issue,” Gupta stressed. “Hong Kong itself is a special administrative region with full autonomy over its economic arrangements and, therefore, if Hong Kong were to have some sort of economic arrangement with the US, Beijing won’t necessarily oppose that.”“You know, there has been far worse that the US has done with regard to Chinese interests during the course of these negotiations. I’m talking specifically with regard to these huge weapons sales which has been okayed for Taiwan,” he said, adding that the two sides are poised to continue the negotiations anyway.