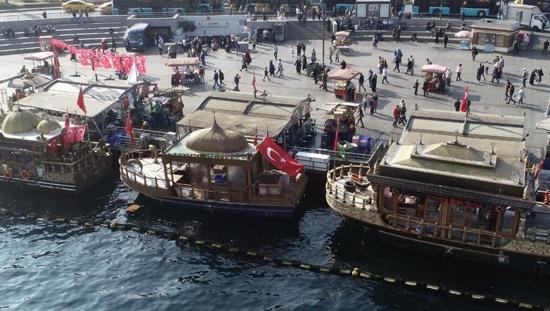 The Istanbul Metropolitan Municipality has decided to close the seafront on the mouth of the Golden Horn to fish sandwich-selling boats.

In a notice sent to owners of three boats anchored along the shore between Galata Bridge and a private ferry port, the municipality said that their contracts of lease will expire on Nov. 1 and will not be renewed.

Some 150 people have been employed in the three boats selling fish sandwiches, called “balık-ekmek” in Turkish, since 2007. The owners of the boats have been paying 900,000 Turkish Liras ($157,000) annually in total since then.

“Balık-ekmek is part of the culture of this quarter. We want this fact to be considered when giving a decision,” said Arif Hikmet İlke, head of the touristic fish sandwich cooperative.

“Yes, there has been some unwanted incidents, but as the boat owners, we have been trying to give the best service to customers,” he added, making a reference to some fistfights and complaints against the staff members’ attitude.

The metropolitan municipality said that no contracts will be made to replace the present boats, and the municipality will take a new approach to the old city of Istanbul, which includes landmarks such as Hagia Sophia, the Blue Mosque and Topkapı Palace.

“An integrated project is being developed regarding the historical peninsula. Eminönü district will be a part of it. There have been some ill-suited views there,” municipality officials told daily Hürriyet, speaking on condition of anonymity.