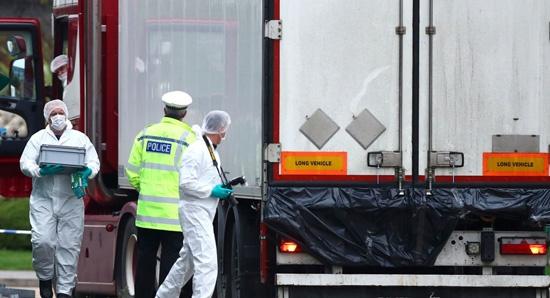 The death of 39 migrants smuggled inside a container from Belgium to the UK has led to the largest mass casualty investigation in Essex Police history. Several suspects, including the driver of the vehicle that is said to have transported them, have been arrested, but the hunt for an alleged Vietnamese leader of the smuggling ring continues.

Police investigating the Essex lorry manslaughter case have tasked a special force to trace an alleged ringleader behind the tragic smuggling operation – a Vietnamese man known as Mr Truong, The Daily Star reports. The investigators are said to be closing in on the man who allegedly organised the fatal journey of 31 men and eight women from Vietnam and China, who reportedly suffocated on their way from Belgium to the UK.

The man is thought to play a key role in a people-smuggling circle and lead a “global ring” in northern Vietnamese provinces that has made millions helping migrants from the Asian country sneak into Western Europe.

As the outlet points out, at least 29 of the Essex lorry victims were from one of these provinces, the Nghe An area near the Laos border. The Mirror cited the family of one of the unfortunate migrants who met her demise in the container, saying that it was her second attempt to enter Britain. According to the report, her parents paid Mr Truong $22,000 for the first part of the journey.

However, as The Daily Star’s source insists, the smugglers are now threatening the families of those who were smuggled.

“As much as these gangs like to hide in the shadows, their names are being whispered in the community. While they now threaten the families who were smuggled with violence to keep them silent, each day the police are building up a picture on the operation Truong oversees”, the source said.

The driver, Maurice Robinson, who allegedly picked up the container in Purfleet, Essex, appeared in court on 28 October. Robinson has been charged with 39 counts of manslaughter and will appear at the Old Bailey on 25 November for a hearing.

Two suspects from Warrington, Thomas Maher and wife Joanna, both aged 38, were arrested in Cheshire on Friday in connection with the investigation, with another 46-year-old Northern Irish suspect arrested at Standsted Airport the same day.

The three have been interrogated on suspicion of manslaughter and conspiracy to traffic people, The Telegraph reported, with the first two having been released on bail awaiting trial on 11 November, while the latter’s will be held on 13 November.

A further “person of interest” was arrested in Dublin by Irish authorities, Essex police confirmed on Monday, and is allegedly the 23-year-old Northern Irish driver who delivered the container to Zeebrugge, according to reports.

The authorities are also searching for two brothers, Ronan and Christopher Hughes, who are 40 and 34 years old respectively and also from Northern Ireland, on suspicion of human trafficking.

Morning brief – Lockdown loosens, lira drops, Diab threatens to ‘retreat’: Everything you need to know to start your Monday