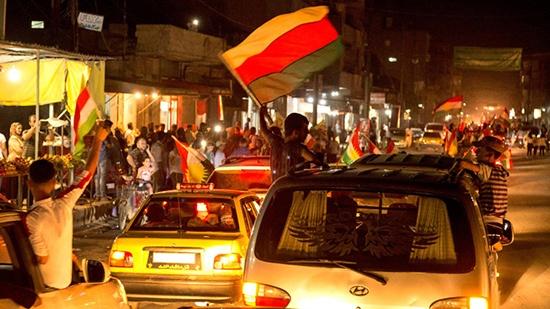 The Kurds had their own de facto autonomies for four centuries within the Ottoman Empire. They also maintained their self-government system for a while after the first world war. The Treaty of Sevres between the Allies and representatives of the Ottoman Sultans in 1920 promised the creation of a sovereign Kurdish state alongside Armenian and Arab states. But the Treaty of Lausanne and other deals between Turkey and European powers ignored this recognition and left Kurds as victims of European interests who wanted to establish renewed relations with Turkey.

After World War Two, despite the second wave of state-building, Turkey joined NATO and with it, sent a message to the Kurds in Turkey and Syria that they could not count on international support.

Indeed, in the post-Sykes-Picot era, the Kurds in the region found themselves internationally isolated. First, in the 1920s, and then the 1930s, Britain allowed successive Iraqi governments to suppress the Kurdish movement, while the Soviet Union provided full support to Turkey, ignoring Vladimir Lenin’s acknowledgment of “the right of nations to self-determination” and the US abandoned Woodrow Wilson’s “14-point principles.”

In Iran, taking advantage of the political vacuum provided by the Soviet occupation in 1941, the Kurds established the Republic of Kurdistan in 1946. But the Soviet policy proved chimerical, completely depending on its relations with Tehran, and when it failed to come through, the Republic failed to hold out.

During the Cold War period, the bipolarity system created a situation in the Middle East in which the new superpowers had a tendency to stabilize ethnic problems where they could successfully fill the vacuum left by former empires Britain and France.

The regional powers, namely Iran and Iraq, while concerned about their internal stabilities, tactically encouraged Kurdish unrest in neighboring countries. Additionally, the Kurdish struggle never received United Nations support, though the UN was itself toothless at that period. The world opinion – unlike today’s current situation –  did not pay the slightest attention to the Kurds, as it was pre-occupied with the ruinous effects of the Cold War on the rest of the world.

The Kurds in Syria

In Syria, the situation was worse than all the other parts of Kurdistan. The Arabization process began in the early 1950s, separating Kurdish regions from each other, turning them into three small discontiguous regions within the country. The Kurds in Syria faced the same difficulties as the Kurds in Turkey. For some of them, the situation became more difficult when the Ba’ath regime denied their Syrian citizenship and even the right to obtain national IDs. “After the French withdrawal in 1946…in an atmosphere of mounting pan-Arab exaltation, its presence came more and more to be regarded as an [offense] and a threat to be suppressed” (Edmonds, 1971). Because of their small numbers in comparison with Kurds in other regions, Assad’s assimilation and Arabization policies were more successful, causing them to lose many territories.

In the 1960s, the process of “de-civilizing” the Kurdish population had been launched to justify this policy. One of the leading security officials at the time had famously written: “People such as the Kurds, who have no history, civilization, language, or ethnic origin, are prone to committing violence and destruction, as are all mountain people’ (cited in Gunter, 2017). Ironically, in the 20th century, the Kurds in Syria neither were involved in violence nor had mountain terrain in which to flee, unlike other Kurdish regions. It is the best answer to those who blamed the Kurds for their armed struggle in Iran, Iraq, and Turkey. The lack of such resistance did not lead to end or to reduce the assimilation policy in Syria.

The absence of a national movement or an armed struggle did not only lead to the improvement of Kurdish circumstances in Syria, but the Syrian government even contributed to the Iraqi army’s suppression of its Kurdish population. Moreover, the Arabic Belt project was completed in 1976, and, in the following year, the names of Kurdish areas were changed to Arabic. Kobani was changed to Ain al-Arab, Serekaniye became Ras al-Ain, and Gri spi to Tal Abyad. Furthermore, to foist an Arab identity in the country, its formal name had already been changed to the Syrian Arabic Republic.

In the early 2000s, it seemed that Iran and Turkey had reached a security agreement to cooperate against Kurdish movements, but since 2011, the Syrian crisis caused a geopolitical confrontation between the two, which provided the best opportunity for Syrian Kurds. Following the Arab uprising, Iran provided full support to the Syrian government while Turkey did its best to remove Assad by backing its opposition groups.

Syria already had many problems with Turkey about Alexandretta, Turkish damming policy of Euphrates, and its relations with Israel. When the conflict between the Syrian army and its opposition escalated, Assad was forced to withdraw its troops from the Kurdish regions. “Iran may use Turkey’s vulnerabilities on the Kurdish issue in an attempt to reshape Turkey’s policy toward the Syrian regime” (Lurrabee, 2013). Iran proved it had no plan to change its policy in supporting Assad at any cost, and Turkey continued its support for Assad’s opponents. The seed of Rojava, the Kurdish region in Syria, and its semi-independent governance is growing hostilities between Iran and Turkey.

When the Arab uprising reached Syria in March 2011, Iran, which already had enough problems on its own land due to the Green Movement, found Assad’s downfall a strategic blow to itself. On the other hand, while Turkey had expanded its influence in Egypt, Tunisia, and Libya, it did all it could to repeat the same pattern in Syria by providing full support to Assad’s opposition. This political and military vacuum was filled by the most disciplined Kurdish force, the People’s Protection Units (YPG), the leading faction in the Syrian Democratic Forces (SDF).

Even though the Kurds in Syria did not claim their own state, a feeling of nationalism and democratic demands were at its highest, and seizing the first opportunity, they built a successful administration in their cities and towns.

Additionally, their bravery in the fight against the so-called Islamic attracted global opinion to their question and increased the Kurds’ profile, in general. They were the only group that cooperated with both American and Russian forces against the Islamic State and other extremist groups. Turkish support for the Syrian opposition was conditional. Turkey did not cooperate with the Kurds and did not accept any Kurdish autonomy in the new post-Assad Syria. Kurdish forces then took the “third way” with the maximum focus on fighting terror groups.

Thus, the generally accepted assumption that Kurdish forces began fighting extremist groups when the Islamic State attacked the Kurdish city of Kobani in 2014 is incorrect. Since 2012 onward, they have demonstrated their ability to fight for secularism, women’s rights, minorities’ rights, and liberal values. Despite their perfect performance, the Americans hesitated to support them, because they were affiliated with the Kurdistan Workers’ Party (PKK), a terror-designated group by the US, Turkey, and the European Union.

But the US changed its strategy and began to supply the YPG with heavy weapons, considering it the most trustworthy ally in the region. Thus, the most fertile region of Syria, which is also very rich in oil, gradually emerged as the second autonomous Kurdish region after the Kurdistan Region in Iraq. In March 2016, the establishment of the Rojava Democratic Federation was announced.

Turkey’s first invasion of northern Syria in August 2016 did not have a significant impact. It only demonstrated Turkish anxiety and vulnerability to the Kurdish rising. The second invasion in 2018, however, led to the occupation of Afrin, an offensive both the US and Russia tolerated. Turkey’s current incursion, while it received a green light from the Americans, has faced strong resistance from the Kurds and also garnered condemnation around the world.

It is unclear what will happen next, but it is difficult to turn the clock back for the Kurds to the former central system controlled by Assad or to accept a Turkish occupation. They now have seven years of experience of self-rule, where they have been free of the 20th-century style of assimilation and suppression. The Syrian Kurds have also provided an acceptable performance of democratic governance concerning the rights of different religious and ethnic groups, respect for women’s rights, and co-existence of many people without claiming a new nation state or drawing any additional borders and barriers between peoples.

The views expressed in this article are those of the author and do not necessarily reflect the position of Kurdistan24.