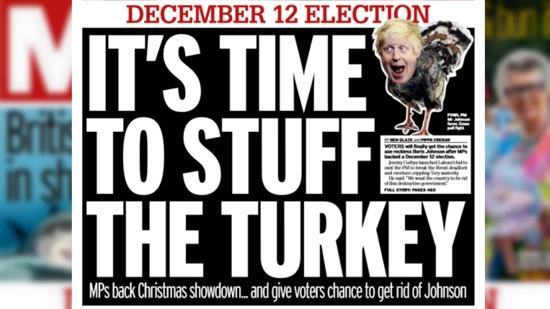 The front pages of British newspapers are festooned with seasonal spirit after MPs in the House of Commons voted on Tuesday night to hold a general election in the run-up to Christmas.

There is almost a palpable sense of relief on Wednesday’s front pages, now that Prime Minister Boris Johnson is finally getting the election he so desired.

The fact that the British public will go the polls on Thursday, December 12, meant it was inevitable that newspaper editors would try and fill the frontpages with Christmas crackers.

The Metro runs with “Jingle Polls!” and accompanies it with a sub-headline that informs readers that it’s the UK’s first Christmas ballot since 1923.

The Daily Mirror says “It’s time to stuff the turkey,” alongside a photo of Johnson’s head superimposed on the body of the festive fowl. “MPs back Christmas showdown… and give voters chance to get rid of Johnson,” it adds.

The Daily Mail, traditionally a supporter of Johnson’s Conservative Party, dedicated its cover to an attack on Labour Party leader Jeremy Corbyn. “Don’t let the Grinch steal your Christmas,” it reads, alongside a cartoon of the PM riding Santa’s sleigh while Corbyn steals presents from his sack.

The Daily Express splash says December 12 will be the day “When Britain will vote once and for all to deliver Brexit.”

The broadsheets eschewed the Christmas puns in favor of more dry analysis. The Guardian plays it straight with “Parliament breaks deadlock with December 12 election” above a piece reporting that Corbyn is taking a gamble by supporting the election date.

“Christmas election,” is the straightforward take from The Daily Telegraph. The paper says that Corbyn has finally bowed to Johnson’s “demands for a vote to clear the Brexit impasse.”

The Times runs with “December 12 poll will get Brexit done, says Johnson” and points out that this will be the UK’s “third election in four years”, while The Independent simply says: “It’s on: the Brexit election.”

Returning to the holiday theme, The Sun screamed “New Year’s Leave” as it raised the prospect of a Johnson victory allowing the UK to leave the European Union on New Year’s Eve.