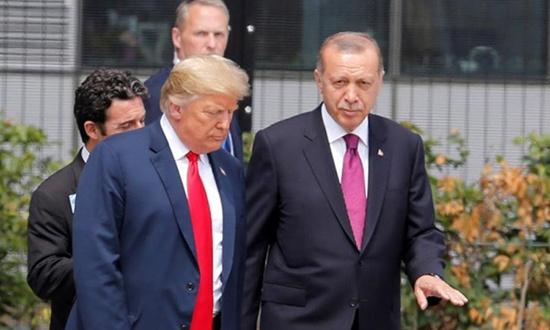 The morning after a summit meeting often holds surprises. Turkey lost no time to follow up on President Recep Tayyip Erdogan’s hugely successful but “difficult” talks with his Russian counterpart Vladimir Putin in Sochi on October 22.

On October 23, Ankara formally conveyed to Washington Erdogan’s decision that the Turkish military was stopping combat and ending the offensive in Syria codenamed Peace Spring, and making permanent the ceasefire agreed with the United States during the visit by Vice-President Mike Pence on October 17.

President Donald Trump promptly reciprocated by lifting the US sanctions against Turkey imposed on October 14 in response to Peace Spring. Trump, characteristically enough, claimed credit for “an outcome created by us, the United States, and nobody else, no other nation.”

The Turkish intimation comes in handy for Trump to scatter critics who predicted apocalypse now in Syria. Trump sounded confident that the ceasefire would hold.

Enter General Mazloum Kobani Abdi. Trump disclosed that he spoke to the general, who is the military supremo of the YPG – People’s Protection Units, the Syrian Kurdish militia – before making his announcement on the lifting of sanctions against Turkey.

Trump hailed the Kurdish chieftain “for his understanding and for his great strength and for his incredible words today to me.” The optics work just perfectly for Trump to push back at critics who allege he has thrown the Kurds under the bus.

But Trump also disclosed that he was on to something bigger. First, that Abdi assured him that “ISIS is under very, very strict lock and key, and the detention facilities are being strongly maintained.” The Kurdish-held regions have detention camps holding thousands of ISIS cadres and their families.

Second, Trump recalled: “We also expect Turkey to abide by its commitment regarding ISIS. As a backup to the Kurds watching over them, should something happen, Turkey is there to grab them.” Interestingly, Trump also called on European countries to accept the ISIS prisoners.

In the infamous “undiplomatic” letter to Erdogan earlier in October, Trump had voiced an audacious idea that Abdi could be a potential negotiator with Erdogan. To quote Trump, “General Mazloum is willing to negotiate with you [Erdogan], and he is willing to make concessions that they would never have made in the past. I am confidentially enclosing a copy of his letter to me, just received.”

Yet Abdi is Turkey’s most wanted terrorist, who worked in the ranks of the separatist PKK (Kurdistan Workers’ Party) for nearly three decades. It is necessary to connect some dots at this point.

Looking back, when Erdogan came to power as prime minister in 2003, he unfolded a bold vision on the Kurdish problem via a negotiated political reconciliation. His approach was encouraged by the US. But he ran into headwinds and eventually lost his sense of direction.

To recap further, in late 2012, Erdogan went public with a dramatic announcement that top Turkish officials had begun negotiations with PKK leader Abdullah Öcalan, who was captured in 1998 and is undergoing life imprisonment on Imrali island in the Sea of Marmara off Istanbul.

Öcalan responded in March 2013 to Erdogan’s overture by calling for a ceasefire, and PKK guerrillas actually began to withdraw from Turkey. As peace talks faltered, however, the ceasefire collapsed in July 2015.

But significantly, Öcalan has continued to advocate for a negotiated agreement to bring about Kurdish autonomy within Turkey. Now, isn’t it an interesting coincidence that Mazloum Abdi, Trump’s interlocutor among the Syrian Kurdish leadership, also happens to be the adopted son of Öcalan?

Abdi is likely to visit Washington in the near future; so is Erdogan. Trump is promoting Kurdish reconciliation with Turkey. The last few weeks’ developments on the diplomatic front have removed the single biggest source of tension in the US-Turkey relations – the United States’ alliance with the YPG and the presence of Kurdish fighters along Syria’s border with Turkey.

Curiously, Trump also said in his announcement: “We’ve secured the oil, and, therefore, a small number of US troops will remain in the area where they have the oil. And we’re going to be protecting it, and we’ll be deciding what we’re going to do with it in the future.”

Most of Syria’s oil comes from the country’s east, which is now under the control of the US-backed Kurdish militia, the YPG. One expert said before the war, Syria produced 387,000 barrels per day, of which 140,000 bpd were exported.

In February last year, Syrian forces backed by Russian mercenaries made a serious incursion in the area but retreated in disarray after suffering heavy casualties following merciless US air-strikes. Relative calm has prevailed in the region since then.

Evidently, in the geopolitics of Syrian oil, the US, Turkey and the Kurds can have a win-win partnership, which in turn can also provide the underpinning for an enduring political reconciliation between Turks and Kurds.

Trump said Washington was mulling over Syria’s oil reserves. Meanwhile, he has put across a tantalizing proposition for Erdogan to ponder. It demands a leap of faith on Erdogan’s part, but it could be rewarding.

Erdogan has allowed Öcalan access to his family and lawyers and even to relay messages to Kurdish activists. Erdogan knows that if ever he is to solve the 30-year-long conflict with the PKK, he may have to do so with the involvement of Öcalan.

In December 2017, Erdogan sent Turkey’s spy chief and trusted aide Hakan Fidan to Imrali for talks with Öcalan. Two Kurdish members of the Turkish parliament were also allowed to visit the PKK leader.

While accompanying Pence to Ankara, Secretary of State Mike Pompeo hinted that the US was looking for an expanded regional partnership with Turkey and if Erdogan works “alongside” Trump, it “will benefit Turkey a great deal.”

The US policy aims to counter Iran’s influence and presence in Syria and Iraq. The decision to transfer US troops from Syria to Iraq and the continued stationing of troops in Al-Tanf base in southern Iraq highlights that cutting off Iran’s land route to Syria and Lebanon continues to be a priority.

Broadly, many challenges lie ahead in Syria as the US realizes that Turkey is irreplaceable as a regional partner. Trump has always seemed to think of Erdogan as someone with whom he could do business.

Ankara will welcome a grand bargain between Erdogan and Trump and regards the United States’ backing for a Turkey-led “safe zone” on Syrian territory as a step in the right direction. In the final analysis, however, for all of this to happen, one way or another, Turkey’s tensions with Kurds should ease.

M.K. Bhadrakumar is a former diplomat who served for more than 29 years as an Indian Foreign Service officer with postings including India’s ambassador to Turkey and Uzbekistan.