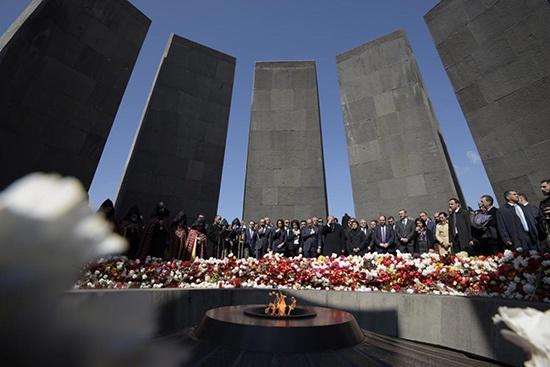 Bill marks the first time US Congress describes the killing of Armenians by Ottoman forces during World War I as a genocide.

The US House of Representatives has overwhelmingly passed a resolution recognising the atrocities committed by the Ottoman Empire against Armenians in the First World War as a “genocide”.

In a 405 to 11 vote on Tuesday, legislators passed a resolution titled “Affirming the United States record on the Armenian Genocide”.

The bill marks the first time either chamber of Congress has described the killings of Armenians as a genocide.

“Today let us clearly state the facts on the floor of this House, to be etched to the congressional record: The barbarism committed against the Armenian people was a genocide,” said Democratic House Speaker Nancy Pelosi ahead of the vote.

Turkey denounced the passage of the resolution calling it “devoid of any historical or legal basis”.

“The resolution itself is also not legally binding. As a meaningless political step, its sole addressees are the Armenian lobby and anti-Turkey groups,” the Turkish foreign ministry said in a statement late on Tuesday.

‘Today let us clearly state the facts on the floor of this House, to be etched to the congressional record: The barbarism committed against the Armenian people was a genocide’

The resolution states that “the United States has a proud history of recognising and condemning the Armenian Genocide, the killing of 1.5 million Armenians by the Ottoman Empire from 1915 to 1923”.

The country has also provided “relief to the survivors of the campaign of genocide against Armenians, Greeks, Assyrians, Chaldeans, Syriacs, Arameans, Maronites, and other Christians”, the bill reads.

Similar measures have failed in the past – most recently in 2010 when then-President Barack Obama urged lawmakers to drop a resolution that would have recognised the killings as a genocide.

Successive US presidents have refrained from using the term “genocide” in reference to Ottoman massacres of Armenians to preserve Washington’s alliance with Ankara.

While Turkey acknowledges that Ottoman forces killed Armenians in battles during World War I, it rejects the number of victims often cited by historians.

Ankara says the killings were not part of an organised campaign and do not amount to genocide, and it has previously condemned countries that recognised the killings as a genocide.

The Turkish embassy in Washington did not respond to MEE’s request for comment on Tuesday.

But as several US representatives spoke in favour of the historic bill, the focus often shifted to a more recent conflict: Turkey’s incursion in northern Syria.

“Turkey’s current action in northern Syria against our Kurdish allies is extremely concerning, and … we cannot stand by and let egregious human rights violations happen,” Republican Congressman Gus Bilirakis said on the House floor before the vote.

Indeed, the resolution comes amid growing anger in the US against Turkey, which launched an assault against the US-backed, Kurdish-led Syrian Democratic Forces (SDF) earlier this month.

In fact, lawmakers followed the vote on the Armenian genocide on Tuesday by passing a bill that would impose sanctions in Turkey over the offensive in Syria.

The sanctions measure, which would include a visa ban on Turkey’s defence minister if it becomes law, passed in a 403-16 vote.

In its statement on Tuesday, the Turkish foreign ministry suggested that the House measure on the Armenian genocide is aimed at Turkey’s military offensive in Syria.

“Those who felt defeated for not being able to forestall Operation Peace Spring would be highly mistaken [if] they thought that they could take vengeance this way,” it said.

The operation began after after Donald Trump withdrew American troops from northern Syria.

The pullout prompted a backlash against the White House, with Democratic and Republican lawmakers accusing the US president of betraying the country’s Kurdish allies.

The Kurds played a major role in the fight against the Islamic State (IS) group in Syria.

The US brokered a ceasefire agreement on 17 October that led Trump to lift the economic sanctions that his administration imposed on Turkey over the offensive.

However, members of Congress have said they intend to continue to push for measures to punish the Turkish government for its incursion in northern Syria.

On Tuesday, Turkey said the passage of the sanctions proposal in the House violates the ceasefire agreement, which stipulated that Washington would lift sanctions on Ankara after the fighting stopped.