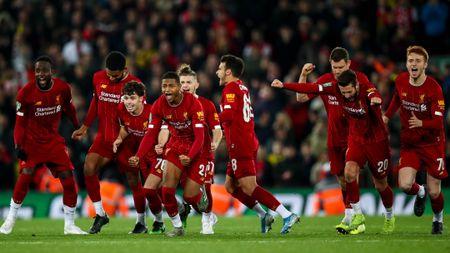 A review of Wednesday’s action in the Carabao Cup including Liverpool’s penalty shoot-out win over Arsenal following a 5-5 draw at Anfield.

A crazy Carabao Cup fourth-round game had an equally dramatic finish as Liverpool beat Arsenal 5-4 in a shootout after Divock Origi’s goal deep into added time to make it 5-5 had taken it to penalties at Anfield.

The game maybe did not have the aesthetic finesse of the 4-4 on this ground in 2009, when Andrey Arshavin scored all of the visitors’ goals, but it was no less entertaining on a number of different levels.

Aside from 10 goals there were a couple of non-decisions which looked prime candidates to be overruled for VAR, had it been employed in this competition, backstories aplenty and, of course, Origi’s added-time equaliser.

In the shootout Gunners’ substitute Dani Ceballos was the only one to miss as teenage Scouser Curtis Jones scored the winner in front of the Kop.

The England striker crashed in an unstoppable drive from fully 30 yards out to secure a 2-1 win and a place in the last eight.

Chelsea had hauled themselves level through Michy Batshuayi after Rashford opened the scoring from the penalty spot.

But Rashford’s stunning free-kick ended Chelsea’s seven-match winning streak as they failed to get a measure of revenge on United for their 4-0 defeat on the opening day of the season.

Villa through to last eight

Ahmed Elmohamady downed Wolves to send Aston Villa into the quarter-finals of the Carabao Cup.

The defender grabbed a second-half winner to clinch a 2-1 victory as the hosts reached the last eight for the first time since 2012.

Patrick Cutrone did cancel out Anwar El Ghazi’s opener before missing a glorious chance to level for a second time.

Villa never looked in serious trouble, though, and they remain in the hunt for a trophy they last won in 1996.