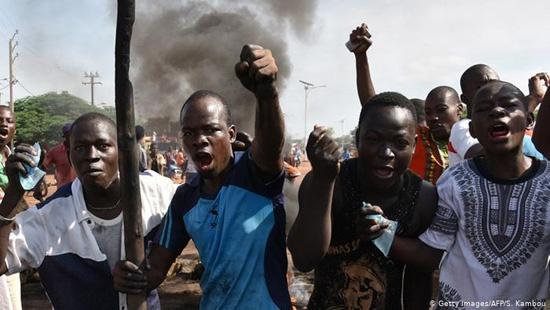 Five years after an uprising chased Blaise Compaore from power, terrorism and its dire impact on a rural economy cast a pall over a country that had hoped for a democratic, prosperous future.

“We are working hard to ensure that the president returns immediately and triumphantly to the country,” says Mamadou Abdel Kader Traoré, who leads a movement for the comeback of Blaise Compaore. While this might be taking nostalgia a step too far, many Burkinabes feel deeply disappointed by the years that followed the uprising that ousted a 27-year-old regime, on October 30 and 31 of 2014. At the time, tens of thousands took to the streets to keep the president from changing the constitution to extend his rule. In the end, he resigned.

Among those at the forefront of the uprising were Marcel Tankoano and his Movement April 21 (M21). “We helped topple the Compaore regime because there was no hope left for improvement at the economic and social level. The people were suffering,” he told DW. But the memory of corruption, poverty, and autocratic rule seems to have faded since then. Compaore, who fled the country to neighboring Ivory Coast to escape an international search warrant, has seen his reputation improve with the deterioration of security and the negative impact on the economy.

Contrary to its neighbors to the north, Mali, and Niger, for many years, Burkina Faso was spared the scourge of Islamic terrorism. That changed in 2015, says security expert and independent analyst Laurent Kibora. “Former President Compaore had a stick-and-carrot strategy, whereby he built up an efficient anti-terrorism unit, but, at the same time, he negotiated with these jihadist groups. Many even believe that he had a non-aggression pact with them,” Kibora told DW. “The fall of the regime was followed by a period of disorientation.” The reason is that security services were restructured, and a lot of expertise was lost.
Jihadists linked to Al-Qaeda and the Islamic State group use hit-and-run guerrilla tactics, road mines, and suicide bombings.  These methods have claimed more than 600 lives according to estimates. Around 300,000 people have fled their homes. The impact of the attacks on the rural economy is escalating, disrupting agriculture, trade, and markets. “People are truly fed up. They get their livestock stolen. Many have to flee,” Kibora said, criticizing the government for not having reacted swiftly enough to the Islamist threat, even if it was caught short by the crisis.

The government ‘has failed’

On a recent trip to Germany, Burkinabe Education Minister Stanislas Ouaro told DW that the government was well aware of the impact of the terrorist groups. “Many schools had to close, with consequences for the pupils’ schooling,” he said. Efforts to restart over 3000 paralyzed schools have produced modest results: “We were able to reopen 483 schools in the school year 2019-2020,” Ouaro said.
“The balance sheet is catastrophic and macabre,” Traore told DW. “You just have to look at the killing and the terrorism to understand that the current government is unable to deal with the situation.” Traore believes that the people who took to streets to overthrow Compaore were manipulated by wily politicians acting in their interest.
Marcel Tankoano agrees that the situation is dire. “If there are people who want Blaise Campaore to come back, that means that the current government has failed,” he said. He does not regret the uprising and the role he played in it. “But the insurrection is incomplete,” he said, pointing out that too many of the political, economic, and social ‘old guard’ were still in power.

A call for unity and reconciliation

Tankoano is particularly disappointed with the gradual eroding of democratic rights and freedoms conquered when the former regime was overthrown. “Anti-government demonstrations are banned, but if you want to demonstrate for the government, you may,” he said. Non-governmental organizations like Human Rights Watch (HRW) go further, accusing the national army of extra-judicial executions and other atrocities in the fight against terrorism. “This approach has alienated the nomadic Fulani, members of the ethnic group most affected by this approach,” HRW says, further dividing the country and exacerbating the violence.

No matter their very different views on the past and how to go on from here, Mamadou Abdel Kader Traore and Marcel Tankoano separately gave the same answer when asked what was needed to pull the country out of the crisis. “Everybody must understand that in order to save Burkina Faso we must have unity. The only solution is reconciliation,” Tankoano said. “We want all Burkinabe to stand together to throw the terrorists out of the country. We only have one Burkina,” Traore said.