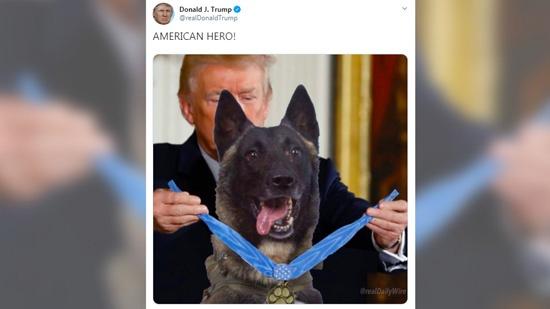 Content with not maintaining any credibility whatsoever, MSM decided to completely tarnish the last smidgen of integrity by losing it over a meme of US president Donald Trump giving a medal to a dog that helped kill ISIS leader.

It all began when President Donald Trump tweeted out a meme created by the Daily Wire. The image depicted him giving a medal to the brave dog that helped corner the recently deceased Islamic State leader, Abu Bakr al-Baghdadi. The picture is clearly fake and is just Trump having some fun celebrating a successful military raid.

The media, missing the humor – or just wanting to manufacture yet even more outrage as that seems to be all they run on these days – jumped in to express disbelief over the photoshopped image.

Steve Herman, the White House bureau chief for the Voice of America, thought it necessary to contact the president’s homestead and ask if the photo was photoshopped, even going so far as to confirm that there “was no such canine event” on the POTUS’ schedule. Meanwhile, Shirish Date, the White House correspondent at the Huffington Post, boldly stated the president was “disseminating a doctored image created by a right-wing propaganda site.”

As the day wore on, journalists, public figures, and news organizations jumped in to cry foul at the “altered” photo. A comical turn of events as it only proves what those of us on the right have been claiming for years. The left can’t meme.

It’s never fun to be the one having to explain a joke, but since it’s gone over so many people’s heads, let me spell it out. The Daily Wire photo is meant to look fake, that is part of the humor. It is a meme in one of the most basic senses. Making every complaint that it is bad photoshop null and void.

The image of the dog was pasted over a picture of a real medal of honor ceremony, but even James McCloughan – the original recipient – found the spectacle humorous. While talking to the New York Times he told them he recognized the image as Trump honoring the dog’s heroism, and that he laughed when he was shown it. He wasn’t offended in the least, but as all things go, that hasn’t stopped others from getting offended on his behalf.

On the one hand, it is easy to sit back and laugh at the entire ordeal. Seeing public figures and once renowned organizations losing it over an obvious attempt at humor is certainly… something. But on the other hand, it’s a tragic ordeal that shows just how far people are losing it.

Every president is worthy of criticism, and Trump is certainly not exempt from that by any metric. Yet, what is happening now is that the derangement syndrome he has caused within so many people’s noggins is destroying them from the inside out. We are seeing an intentional dumbing down of the masses, all in an attempt to obtain some false victory over the man.

People are pretending his tweet is a serious attempt at duping the world into thinking he actually gave a dog a medal, when the truth is that he’s just having some fun with a well earned military victory. How can anyone look at the photo and not see it for the obvious meme that it is?

This event only proves one of two things. Either journalists and the media are willing to feign idiocy in an attempt to create fake moral outrage directed at a sitting president in a turn of events that only backfires on them, or they’re actually idiots who believe what they say. Whatever the answer, I weep for the future of journalism. It may not be dead yet, but it might soon drown within its own crocodile tears.

By Sophia Narwitz, a writer & game journalist from the US.