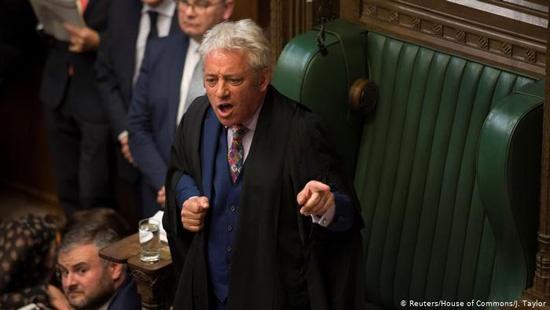 Obnoxious, pig-headed, pompous and a bully: That’s a smattering of what John Bercow was called while Speaker of the UK’s House of Commons. But his divisive tenure had a high entertainment value, write’s DW’s Rob Mudge.

“The gentleman should refrain from chuntering from a sedentary position ineloquently and for no obvious purpose.”

Even those who don’t follow parliamentary debates in the UK’s House of Commons religiously (yes, guilty. I know, it’s sad) will at some point have come across John Bercow’s immortal words, uttered in his inimitable fashion.

A few weeks ago, Bercow announced to Parliament that he would be giving up his position as speaker of the house on October 31 — the day the UK was supposed to leave the European Union. Coincidence? Honi soit qui mal y pense!

It’s fair to assume that the Conservatives will be glad to see the back of him. Ever since the UK’s EU referendum in 2016, Bercow, who was a member of the Conservatives prior to his election as speaker in 2009, has been a thorn in the government’s side. At almost every twist and turn, especially over Brexit, he’s attempted to make sure that the government doesn’t ride roughshod over Parliament’s demands for transparency and clarity. For his efforts, he’s been labeled as objectionable, self-opinionated and arrogant, but that hasn’t stopped him from trying to dust off Parliament’s cobwebs and update its crusty old traditions.

Indeed, one of Bercow’s hallmarks was to reform and modernize the role of speaker, both in appearance (no speaker’s robes, knee breeches and tights for him) and in substance. He has sought to redress the balance of power reclaiming Parliament’s constitutional role to counter an increasingly powerful and overbearing executive.

He revived the little-used “Urgent Question” procedure, which allows lawmakers to request that a minister come to answer questions on an important issue. “On more than 570 occasions over the last nine-and-a-half years, I have seen fit to grant urgent questions … so that the government can be legitimately questioned, probed, scrutinized, challenged and held to account,” he said recently — knowing full well that a government does not enjoy being probed, scrutinized and challenged.

Bercow either used or ignored convention as it suited his purpose. On the latter, Bercow threw a spanner in the Brexit works in January byallowing a vote on an amendment to a government business motion regarding the Brexit deal. The amendment required then-Prime Minister Theresa May to table a motion within three days on proposed alternative plans if her Brexit deal was rejected by Parliament.

Then, just before the initial Brexit deadline in March — in a move that triggered near apoplexy among the Tories — he preempted a move by the government to bring the EU Withdrawal Agreement for a third meaningful vote. Quoting from the “bible” to parliamentary procedure, Erskine May, Bercow said, by convention, the question “may not be brought forward again during the same session” and that it was a “strong and longstanding convention” dating back to 1604.

Credit where credit is due, however, he’s not been immune to making a hash of certain incidents. His acumen and prowess seemed to have deserted him during the 2009 expenses scandal when it was revealed that Bercow had avoided paying capital gains tax on the sale of two properties. And what he was thinking when he claimed just under £1,000 (€1,160; $1,289) to hire an accountant to fill in his tax returns is anyone’s guess.

More seriously, he’s also been dogged by allegations of bullying and tolerating harassment. Last year, one ofhis former private secretaries said that Bercow had repeatedly bullied him while at work and that he was told to sign a nondisclosure agreement when he left his post, in order to prevent him from revealing Bercow’s bullying. Those incidents leave a bitter aftertaste and call into question whether his attempts to make Parliament fairer and more transparent are merely lip service.

The one thing his divisive tenure hasn’t lacked is entertainment value. Some might argue that the House of Commons is not the place to put on a spectacle or display personal sensitivities. I would contend that politics, at times, takes itself too seriously and that figures like John Bercow have helped to overcome the apparent dichotomy between serious political debate and being able to have a laugh — even politicians are human beings, after all!

I’ll certainly miss his garish ties, his eloquent, yet scathing epithets towards those who would dare to incur his wrath. I’m not sure what he makes of the parody twitter account Sweary Bercow (@BercowSweary, in case you’re wondering) but given his mischievous sense of humor, I assume he’ll appreciate the tribute.