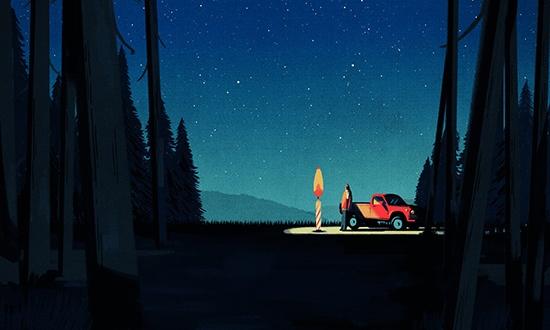 The demise of my old life began with a single, tiny mistake: my partner, making a turn, forgot to signal – and the car accident shattered everything

‘It was September 13, 2018. I was jobless, homeless, reeking of dirt and smoke and sweat, and had just turned 32.’ Illustration: Fabio Cansoli

Two young black bulls stormed up out of the ditch to fight the middle of the road, muscles straining as they bludgeoned one another with their flat, heavy skulls. The red dust they kicked up clung to their sweat-dampened flanks like old blood.

I turned the truck around and took the next side trail into a field and parked – nose out, in case I had to leave in a hurry – next to a man-high pile of cut brush.

I fished my headlamp from the glove box, built a fire and, once it was going, put on a pot of water. While it came to a boil I laid out my bed in the back of the truck: sleeping pad, wool blanket, down bag and a duffle of clothes for a pillow.

Beyond the fire true night had set in, blue-black as a bruise, stretching over the steppe and sage brush country of the southern British Columbia interior. I threw a pack of ramen in the hot water and ate it, without relish, straight from the pot.

Later, I poured myself a generous cup from a box of wine. It had a cheap, tinny taste but I took a greedy sip as I reached for my phone. I had dozens of unread messages.

Hope you’re having a great birthday!

It was 13 September 2018. I was jobless, homeless, reeking of dirt and smoke and sweat, and had just turned 32.

The ship which keeps a life afloat is constructed of surprisingly flimsy material. Not all shipwrecks are physical; there are things which can swallow up what’s inside you as easily as the sea.

At the time I was setting up camp in that field I had been living in poverty – either homeless or housing insecure – for over two years. I had been cripplingly depressed for just as long.

The demise of my old life began with a single, tiny mistake: my partner, making a left-hand turn, forgot to signal.

The car accident shattered our lives; my partner incurred a concussion which left her in need of near-constant care. I maxed myself out – physically, emotionally, mentally, financially – only to be met with another blow: when my partner recovered, she cheated on me, ending our relationship. This emotional strike was worsened by a practical one – I had given up my apartment just weeks before the breakup because we had intended to move in together. Now I was left reeling, one-two gut-punched by the financial and emotional distress of the situation.

Poor or unwell people make choices with short-term payoffs, rather than looking at long-term goals

I soon began to make decisions based on what I could tolerate, not on the wisest and most logical outcome. I quit my job and fled into the bush, where I worked as a professional forager. I lived in an old truck and camper without running water, electricity, proper food, sanitation or internet.

Naturally, this only further strained my precarious finances, which in turn required more and more mental energy to handle. Soon, I was living hand-to-mouth in the bush, so profoundly depressed that to get out of bed without a drink was impossible.

The coup de grace was not so much a blow as a blade on which I fell willingly.

I began a relationship with a man who quickly took what little control I had left. A master manipulator, he threatened and abused me physically and emotionally, assuming control of my money, curating where I went and who I spoke to. When I had the strength to protest, he battered me down. No one else would have me – that my ex had cheated on me was proof of that – because I was crazy, he said. Anything I said or did, especially if it was about the way he treated me, was a result of this instability.

When the relationship reached its bitter, violent crescendo – a drunken sexual assault – I was so convinced of my own insanity that, the next day, when he told me he had not raped me but “punished” me for the way I had treated him so he could forgive me, I believed him.

I believed him so much that, with my body still bruised and aching, with his hand marks still red in the small of my back, I apologized to him.

After that, there wasn’t much left of me for a long, long time.

Back at the campsite, I had begun to cry and the jag threatened to turn into a panic attack, which I pushed back with wine. I forced myself to breathe deeply and reached for the empty coffee can in which I kept my money.

Earlier in the year, my credit card had been closed and the meagre contents of my bank account – $86.32 – seized. What little money I made now I kept in cash, which I counted daily, a soothing act. Money is power in that it determines the range of your choices: what you can eat, wear and do. Counting it was like holding that power in my hands, a physical tabulation of my ability to survive.

That money had been painstaking earned over the spring and summer, which I had spent as a farmhand, fruit-picker and vineyard worker, hustling from town to town as the work came and went.

I was 2,000km (1,243 miles) from my destination – home – in Whitehorse, Yukon territory. Eating as little as I could, sleeping in my truck, if nothing went wrong – if I didn’t get in an accident, if I did not hit bad weather, if another bearing did not go, as the left front one had a week ago – then I would get to Whitehorse with around $2,300.

I had no job or housing arranged and winter was coming, but I had the money to get home, so I was going. It wasn’t much of a plan, but it was the only one I had.

After I left my violent ex-boyfriend, I had washed up on a friend’s couch in Montreal. In this new city, away from him, I was supposed to be safe, but I didn’t feel safe.

Anxiety coloured everything in neon hues of danger, made more real by the omnipresence of poverty. I took brutal panic attacks which petered into dissociative episodes, in which I felt as if some other person – one I did not know or like – was playing the part of myself in a movie I had not seen. I drank copiously in the day, self-medicating. My nights were a blur of hot-wired, drunken insomnia. Later, I would be diagnosed with PTSD.

In the hour you are most alone, all the love in the world is not enough

My condition made me near unemployable. I got by on a mixture of charity, odd jobs and freelance work, which I was often late on, unable to maintain concentration. I did not know where to ask for help. What few clinics offered free therapy – when I had the energy to look – had long wait lists.

All that long, dark winter in Montreal, the thought of suicide – the relief of it – was with me.

I was so lucky, through all this, to have been blessed with so many good friends, who loved me and stood with me through so much, even when I did not deserve it. I was not a good friend at that time, selfish and needy. To give to others – a dollar or a minute of yourself – you need surpluses, and I had none. I am humbled my friends saw this, and forgave me.

I would like to write that it was this great love which saved me, but that’s not true. In the hour you are most alone, all the love in the world is not enough.

In the morning, my breath had frosted over the inside of the windows and the field was covered with a pall of wet snow.

As I moved about in the cold, making coffee and eating a slice of dry bread, I noted a pain in my right eye. All day it grew as I drove north. That night I had a fever, sweating and tossing in my sleeping bag.

An ER doctor told me I had a severe stye – an infection by staphylococcus aureus bacteria of the eyelid – caused by my poor diet and dirty living conditions. He wrote a prescription for antibiotics even as he said they wouldn’t work. I didn’t fill it; instead, I picked yarrow and plantain, crushed and wrapped them around teabags soaked in cheap whisky, which I taped to the infected eye, hidden behind a pair of sunglasses. I drove home like that, 1,500km of twisting mountain passes, changing the compress in gas station bathrooms.

I saw a better doctor the day I arrived in Whitehorse; gently holding my head with one hand, she lanced the infection. A thin trickle of poison ran down my face as it drained. When it was over I felt better, but also empty, aching, as you do after you have cried for a long time when crying for a long time was what you needed.

In the following months, I lived on couches and housesat, penniless in the brutal Yukon winter. I drove editors crazy chasing the money from freelancing assignments. I took cash jobs fixing houses. I keenly felt my poverty and sometimes slipped back into depression.

Slowly, though, cheques and assignments came in. I filled the fridge with food, went to bed warm.

One cold day in February, I bought a package of wool socks. I threw out my old ones, full of holes. I wept when I put on the new ones.

Recently, I went out with a few friends. We had drinks and pizza. When the evening was over I went home – in July, I found housing, a room in an apartment downtown.

I went inside and sat down in an armchair next to a shelf full of books and read for an hour.

Then I got undressed and into bed – my own bed, which is in a house with water and electricity – and lay down, pulling the cool, clean sheets up. It does not yet have a green down duvet, but it will, when I can afford one.

I turned out the light.