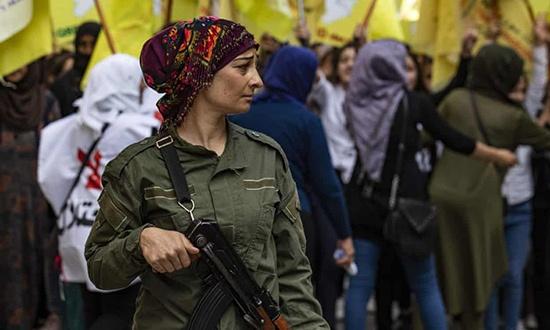 A member of the Kurdish internal security services known as Asayish stands guard during a demonstration by Syrian Kurds against the Turkish assault on north-eastern Syria in Qamishli on 28 October. Photograph: Delil Souleiman/AFP via Getty Images

Syrian Kurds are asking the Pentagon to block US-controlled air space over north-eastern Syria to Turkish armed drones which they claim are causing significant civilian casualties.

Ilham Ahmed, the head of the Syrian Democratic Council (SDC), said the Kurds would hold the Pentagon responsible for Turkish war crimes if they did nothing to guarantee protection from the air.

She told reporters during a visit to Washington that armed Turkish drones were a constant presence in the air above north-eastern Syria, striking at will against both military and civilian targets.

“We have been promised by the United States on a couple of occasions that areas that have US forces will never be attacked by Turkey,” Ahmed said through a translator “However, we saw that the US did not fulfill its promise after the Turkish incursion.

“Armed Turkish drones are still flying over our region and targeting anything they wish to,” Ahmed said.

“We call on the Pentagon go to stop allowing Turkey to use Syrian air space,” she added. “We hold the Pentagon responsible for all the crimes committed by Turkey if they don’t block the air space.”

Ahmed said said the SDC, which is the political arm of the Kurdish-led Syrian Democratic Forces (SDF), had appealed to the Pentagon for help or an explanation but had heard nothing back.

The SDC leader rejected claims by US officials that the ceasefire was holding in north-eastern Syria in the wake of a US troop withdrawal from the border area and a subsequent Turkish incursion.

She said attacks by drones, artillery and Turkish-backed militias were continuing, and that since the start of the Turkish incursion, 509 civilians and 412 SDF soldiers had been killed in the area.

The Turkish government justifies its incursion as a counter-terror operation, pointing to close links between the SDF and the Kurdish insurgents in Turkey, the Kurdistan Workers’ party (PKK).

The SDF accuse the Turkish government of sending in jihadists in proxy militias to carry out ethnic cleansing of the border area. Ahmed said elements in those militias could help the Islamic State regenerate in the region.

From her meetings with US officials, Ahmed said she had statements saying “there is a will to stay” on the part of US forces.

“But until when, why and for what we have no clear answer yet,” she said.

Ahmed added that the deployment of US troops and armour to the oilfields around Deir Ezzor would do nothing for her people.

“If the US forces are going to be remaining in the oilfields in the south when the Turks are attacking us from the north-west, where is the stability?” she asked. “How can we achieve security for the people?”

The head of the regime in Damascus, Bashar al-Assad, said on Thursday that his government would eventually restore control of the north-east in the wake of the Turkish invasion, and an subsequent agreement with the SDF that allowed regime forces to take up positions along the border, on condition that Kurdish fighters not be asked immediately to hand over their weapons.

Asked about the status of SDF talks with Damascus, Ahmed replied: “Reaching a political solution about the future of north-east Syria … is the key to our discussion with the regime and for our forces integrating into the Syrian army.”