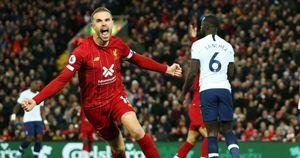 Press Association · Columnist
Take a look at why Liverpool may pull out of the Carabao Cup as we run through their fixture problems in December.

Liverpool’s thrilling Carabao Cup victory over Arsenal has created a new headache for the club as their mounting fixtures are now starting to run into each other.

Manager Jurgen Klopp has threatened to quit the competition unless the English Football League reschedules a favourable day as the proposed dates for their quarter-final tie with Aston Villa clash with their Club World Cup participation in Qatar next month.

Here the PA news agency looks at the issues.

Liverpool have already had to postpone one Premier League match, at West Ham on December 21, due to a commitment to play in the Club World Cup as European champions.

Their departure for Qatar is a couple of days before the last-eight tie at Villa Park was scheduled to be played so Klopp’s players will not even be in the country when the other matches are played.

So what are the options?

A packed festive programme rules out a quick catch-up on their return and the most sensible decision, with the FA Cup also coming into play, would be to stage Liverpool’s quarter-final tie in the week commencing January 6 on a date which is currently allocated for the first leg of the semi-final (the League Cup is the only competition which has a two-legged last-four format).

That would then mean the EFL pushing back one of the semi-final first legs to one of two midweek dates between then and the date of the second leg, week commencing January 27.

Liverpool have a huge squad and academy programme, why not just play the youth team?

For starters, many of the best younger players were already in the team or the squad to face Arsenal after Klopp made 11 changes to rest his senior players. It is likely Klopp will take some or all of them to Qatar in an extended travelling party.

That would effectively leave the club faced with putting out a side containing players not considered ready for first-team exposure, devaluing the competition at a critical stage and doing little for those players’ confidence and development.

On the face of it, yes. He has long been a critic of fixture congestion and with the Carabao Cup coming last on his list of priorities, behind even the Club World Cup, the German will have no hesitation in conceding the tie if he feels the EFL has not considered the situation properly and is detrimental to the club’s overall aims, which in addition to the Premier League and Champions League challenges also includes the development and well-being of academy players.

Liverpool’s profile, as eight-time winners of the competition, reigning European champions and a global brand, means the EFL, its sponsors and broadcasters would be reluctant to lose them on a technicality, especially after that 10-goal, penalty shoot-out victory over Arsenal on Wednesday night.