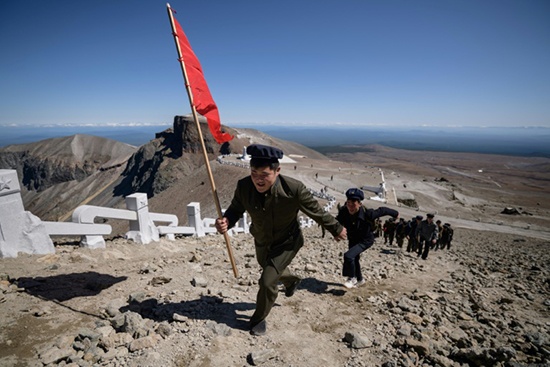 SEOUL (Reuters) – Successful sanctions evasion, economic lifelines from China and U.S. President Donald Trump’s impeachment woes may be among the factors that have emboldened North Korea in nuclear negotiations, analysts and officials say.

Both Trump and North Korean leader Kim Jong Un continue to play up the personal rapport they say they developed during three face-to-face meetings. But North Korea has said in recent days that it is losing patience, giving the United States until the end of the year to change its negotiating stance.

North Korea has tested the limits of engagement with a string of missile launches, including two fired on Thursday, and experts warn that the lack of a concrete arms control agreement has allowed the country to continue producing nuclear weapons.

The missile tests have practical value for the North Korean military’s efforts to modernize its arsenal. But they also underscore Pyongyang’s increasingly belligerent position in the face of what it sees as an inflexible and hostile United States.

In a best-case scenario, Thursday’s launch was an attempt to make the December deadline feel more urgent to the U.S., said Andray Abrahamian, a visiting scholar with George Mason University Korea.

“Still, I think that Pyongyang has concluded they can do without a deal if they must,” he said. “The sad thing is I think that will lock in the current state of affairs, with its downsides for all stakeholders, for years to come.”

Trump’s reelection battle and the impeachment inquiry against him may have led Kim to overestimate North Korea’s leverage, said one diplomat in Seoul, who spoke on condition of anonymity because of the sensitivity of the negotiations.

“It looks like Kim has a serious delusion that he is capable of helping or ruining Trump’s reelection, but no one in Pyongyang can stand up to the unerring leader and say he’s mistaken – you don’t want to be dead,” the diplomat told Reuters. “And Trump is all Kim has. In order to denuclearize, Kim needs confidence that Trump will be reelected.”

The Americans, meanwhile, came into working-level talks on Oct. 5 in Stockholm with the position that North Korea must completely and irreversibly dismantle its nuclear program, and pushed for a moratorium on weapons tests as part of a first step, the diplomat said.

Although some media reports said the United States planned to propose temporarily lifting sanctions on coal and textile exports, the diplomat said the talks in Stockholm did not get into details.

“The U.S. can’t take the risk of easing sanctions first, having already given a lot of gifts to Kim without substantial progress on denuclearization, including summits,” the diplomat said. “Sanctions are basically all they have to press North Korea.”

When American negotiators tried to set a time for another round of talks, North Korean officials were uncooperative, the diplomat said.

“The prospects are not so promising,” the diplomat added.

Although United Nations sanctions remain in place, some trade with China appears to have increased, and political relations between Beijing and Pyongyang have improved dramatically.

A huge influx of Chinese tourists over the past year appears to be a major source of cash for the North Korean government, according to research by Korea Risk Group, which monitors North Korea.

Korea Risk Group chief executive Chad O’Carroll estimates as many as 350,000 Chinese tourists have visited this year, potentially netting the North Korean authorities up to $175 million.

That’s more than North Korea was making from the Kaesong Industrial Complex – jointly operated with South Korea before it was shuttered in 2016 – and is almost certainly part of why Kim is showing less interest in U.S. proposals, O’Carroll said.

The United States and South Korea suggested tourism, rather than resuming the Kaesong operation, as a potential concession to the North after the failed second summit between Trump and Kim in Hanoi in February, the Seoul-based diplomat said.

“That’s based on the consensus that any sanctions relief should be immediately reversible, but once the 120-plus factories are put back in, it’s difficult to shut it down and pull them out again,” the diplomat said.

The United Nations, meanwhile, has reported that North Korea is successfully evading many of the sanctions, and that the government may have stolen as much as $2 billion through cyber attacks.

“Stockholm suggests Pyongyang is also fine with their ‘Chinese backstop’, i.e. whatever agreement they have on lax sanctions enforcement,” Abrahamian said. “I worry that instead of trying to get a deal, they think Trump will be more desperate for a win than he actually is and will miss the window.”

“It’s very clear that the failure of Hanoi triggered a debate inside North Korea about whether Kim’s path – moving down the road to denuclearization – was the right way to go,” said Joel Wit, a senior fellow at the Stimson Center in Washington.

Other analysts are skeptical that Kim will ever give up his hard-won nuclear weapons, but say the opportunity for even a limited arms control deal may be slipping away.

“North Korea appears to be interested only in a deal under its terms to the exact letter,” said Duyeon Kim, with the Washington-based Center for a New American Security.

“Pyongyang is able to demand more, be tougher, and raise the bar because its confidence comes from  qualitative and quantitative advancements in its nuclear weapons,” Kim said.