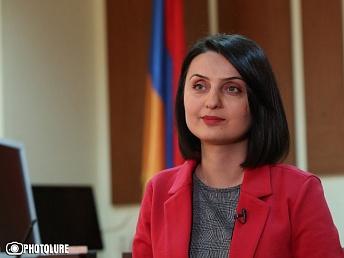 YEREVAN, November 2. /ARKA/. In 2020, the size of retirement and social pensions as well as the size of social allowances will increase, Labor and Social Affairs Minister Zaruhi Batoyan said today when speaking at a parliamentary discussion on the draft state budget for next year.

She said on average, retirement pensions will be raised by 10%, while the size of the minimum (social) pension will be increased from 25,500 drams to 26,600.

She said the size of the so-called basic pension will be increased to 18,000 drams from the current 16,000 drams. The amount, which added to the basic pension for the first ten years will be raised from 800 to 950 drams for each year.

The minister said also that the rise will apply to 33,600 military pensioners and 468,700 retirement pensioners.

Regarding social allowances, Batoyan said steps have been taken to make the assistance more targeted. In particular, social assistance will also be provided to citizens who are in extremely dire straits but who do not have a registered place of residence.

Also, from July 1, the monthly allowance paid to mothers of babies under two years will rise from 18,000 drams to 25,000 drams. According to the minister, this will require additionally one billion drams.