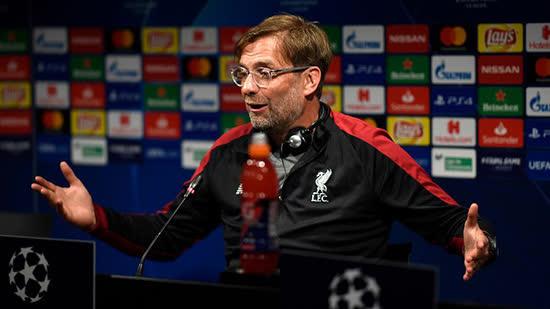 Jürgen Klopp has called on Fifa and Uefa to meet the leading managers in world football over the “crazy” demands on top international players.

The Liverpool manager was a leading critic of the fixture schedule even before his team’s qualification for December’s Club World Cup and progress to the Carabao Cup quarter-final created a clash of dates that remains unresolved. Klopp insists his concerns are for the greater good and shared by “pretty much all managers, especially managers who are in Europe and have a lot of international players”.

He has accused football authorities of placing their own financial interests before the wellbeing of players who drive the game’s popularity, by adding competitive fixtures to the international calendar and proposing an expanded Club World Cup from 2021. But Klopp believes solutions can be found, providing officials listen to those “who have to do the actual work”.

“There should be a meeting with five to 10 top managers in the world, Fifa, Uefa and the CEOs of the big leagues,” he said. “They discuss it and everyone gets the same vote. Just talk about the game again. The game has grown in the last couple of years and I get that … it is a business, we are part of that and we get the benefit of the business 100%. But it grew so much because of the quality of the players.

“Our part of it is to help players fulfil their potential. That only really works with training but in modern football a manager has no time for training any more. You have a pre-season which is disrupted by pretty much everything and for the last 10 days you have your whole squad.

“The biggest benefit this game could get is to give these really good coaches out there more time. This game could be improved unbelievably again to the next level if we had a period in the year when we could really train together.”

Klopp claims leading internationals such as Sadio Mané are approaching breaking point with only two weeks’ rest per year. He cited the proposed expansion and summer move of the Club World Cup in 2021 as another example of the authorities’ disregard for the demands on players.

“I love what I do but we have come to a point where it gets too much. And it gets too much because nobody speaks to the people who have to do the actual work. This Club World Cup in 2021! What? You could have someone in the Champions League final and five days later it starts. A week after that competition finishes we have the African Nations Cup. Do we play the Club World Cup without any African players? Fifa would insist they go for two weeks before the tournament starts to train with their international teams.

“Nobody thinks about it, they just put another competition in. In 2020 we have the Copa América again. There was one this year! The schedule for the boys involved in these tournaments is just crazy. My job is to deal with it but you cannot deal with it, you just accept it and try to make the best of it. If it continues like this then what direction will it lead? We already squeeze every minute out of the 10 days we have together in pre-season as it is. I am not moaning, I am describing the situation. Somebody thought the Nations League was a good idea. Nobody sits around a table and discusses it.”

Liverpool have temporarily suspended from home and away games the fan responsible for the offensive Divock Origi banner displayed at the Champions League match in Genk. The supporter has 14 days to respond, after which a final decision will be taken. Punishments range from a full ban, a ban and education, education on its own or other minor sanctions. It is understood Liverpool’s letter has referenced that education will be considered.