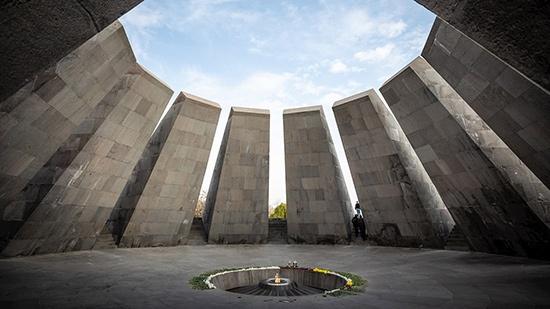 The Middle East diaspora appreciates the House’s recognition at last. But what they really want is repentance.

Armenian Americans breathed a sigh of relief this week when the US House of Representatives overwhelmingly approved Resolution 296 to recognize the Armenian Genocide.

Around 1.5 million Armenians were killed between 1915 and 1923, as the defeated Ottoman Empire transitioned into the modern Republic of Turkey. Less than half a million survived.

The resolution also mentions the Greek, Assyrian, Chaldean, Syriac, Aramean, Maronite, and other Christian victims who lived in Asia Minor and other Ottoman provinces at the time.

If the House legislation is passed in the Senate and signed by President Donald Trump, the United States will be committed to commemorate the genocide, to reject its denial, and to educate people about it in order to prevent similar atrocities in the future.

But if Armenian Americans are finally pleased, the diaspora in the Middle East—much closer to the Turks and the lands taken from their ancestors—demurs.

“It certainly heals some small aspect of our century-long national wound,” said Paul Haidostian, president of the evangelical Haigazian University—the only Armenian university in the diaspora—in Beirut, Lebanon.

“There is some sense of relief. But it should not be exaggerated.”

Nor should it be underestimated, he told CT. All Armenians will welcome the “historic” resolution, though it comes “very late.” But few expect the US Senate will act similarly, as the term genocide has long been rejected by the Turks. “Because it involves Turkey, there is politics involved,” said Haidostian.

“But it is important to call things by name.”

The 405–11 tally reversed what had long been an uphill battle in American politics to even present recognition of the Armenian genocide for a vote.

Representative Adam Schiff, a Democrat from California and co-sponsor of the bill, worked 19 years on its behalf. Pressure against the resolution from Turkey, a NATO ally of the US, quashed previous efforts in 2000 under Bill Clinton, in 2007 under George W. Bush, and in 2010 under Barack Obama.

During the Bush administration, nearly 70 percent of air supplies to the US military in Iraq went through Turkey’s Incerlik airbase.

“We cannot pick and choose which crimes against humanity are convenient to speak about,” said Schiff, as reported by Reuters. “We cannot be cowed into silence by a foreign power.”

Turkey’s incursion into Syria offended much of the US Congress. Following the genocide vote, the House also passed a sanctions bill against Turkey.

“While emotions run high,” the Turkish American National Steering Committee wrote in an email, House leaders are “manipulating the circumstances to introduce H.Res.296 for a floor vote soon.”

But parallels between the Armenians and present-day Kurds were obvious to many.

“Thank you, Congress, for voting overwhelmingly to officially recognize and reprimand the genocide of the Ottoman Empire,” tweeted Bassam Ishak, president of the Syriac National Council. “Let’s try to stop the new demographic change underway by Turkey in northern Syria.”

Similar was Toufic Baaklini, president of In Defense of Christians (IDC), who stated his own family had to flee when 250,000 Maronites were starved to death in Lebanon. IDC lobbied on behalf of the resolution, and in an op-ed before the vote panned the “massive misguided investment of American moral capital” in the US relationship with Turkey.

“By passing this resolution today, America has said clearly that we side with the victims of atrocities and will no longer ignore the Turk’s history of ethnic cleansing,” stated Baaklini.

Representative Anna Eschoo, a Democrat from California of Armenian descent, highlighted the religious aspect of the genocide.

“What all of the persecuted had in common was that they were Christians,” she tweeted. “This resolution not only honors and commemorates my ancestors who perished but all those who were lost in the first genocide of the 20th century.”

But another Christian, Representative Paul Gosar, interpreted the resolution differently. The Republican from Arizona voted “present” at the roll call, labeling it an attack on President Donald Trump.

He stated it was “war propaganda” to compare atrocities against the Armenians with what is happening with the Turks and Kurds today.

“As a Christian I stand with the Armenians, but I will not vote for a lie,” he stated.

The pattern of such discourse is upsetting to fellow Armenians, said Hrayr Jebejian, general secretary of the Bible Society in the Gulf. About 5,000 Armenians currently work in the United Arab Emirates, where they have two churches. Another 3,000 are in Kuwait, where they have a church and a school.

“The genocide is sacred for us,” he told CT. “But knowing American politics, it always looks to the Armenian issue as a bargaining chip.”

Jebejian still has pictures of the two dozen members of his family who were killed in Turkey. He also wonders if the House initiative will go any further. But he is grateful for the international attention it brings.

“It is better late than never,” he said. “But if it was condemned in those days, it would have prevented the many genocides that followed since.”

The Jewish Anti-Defamation League (ADL) endorsed the US resolution.

“Remembering and educating about any genocide—Armenian, the Holocaust, Bosnia, Rwanda, and others—is a necessary tool to prevent future tragedies,” stated ADL president Jonathan Greenblatt, “and [it] begins with recognition.”

But recognition alone leaves much unaddressed.

“I am happy to see our massacre recognized,” Michel Kassarji, the Chaldean Catholic bishop of Lebanon, told CT. “But what can we do now? Will they give us our land and churches back?”

Kassarji’s bishopric doubled in size when 3,000 Chaldean families fled to Lebanon from Iraq and Syria. World Vision helps support his humanitarian efforts, providing a school for 175 children and aid to 125 widows.

But 200,000 Chaldeans were killed along with Armenians in the genocide, including his great-grandfather. Kassarji went back to Turkey a few years ago to his ancestral home of Diyarbakir. Not one Chaldean family remains. Nearby Mardin has one family, with a sole deacon caring for the historic church there.

But Kassarji’s question resonates with many Armenians in the diaspora.

“The map of the world is always subject to change,” said Megrditch Karagoezian, president of the Union of Armenian Evangelical Churches in the Near East, speaking about “Western Armenia.”

“The dream is still there,” he told CT. “But how can it happen with no Armenians there? I don’t know.”

Karagoezian said that many Armenians still hold title deed to their real estate in Turkey. He mentioned the maps of Woodrow Wilson that would have more than doubled the size of modern-day Armenia, on Turkey’s eastern border.

Subsequent treaties following World War I drew different boundaries, however. A briefly independent Armenia became part of the Soviet Union, and the modern republic was created in 1991.

Armenia was the first nation to officially adopt Christianity, in 301 A.D. The faith first arrived as early as 40 A.D., traditionally attributed to the preaching of Jesus’ disciples Bartholomew and Thaddeus.

The Evangelical Church of Armenia was formed in 1846 in Istanbul, and declared an official Protestant millet (a sect allowed to use its own family laws) by the Ottoman sultan in 1850.

But today, Turkey wants to avoid the genocide label at all costs, Karagoezian said.

“It would imply restitution,” he said, “and could eventually translate into some sort of compensation or other political steps.”

The Armenian Orthodox Church has filed a lawsuit against Turkey to return its ancient See of Cilicia. The case is currently working its way through the lower levels of the Turkish legal system.

But for Haidostian, if there is politics involved today, there were politics back during the genocide also. The university president’s people were crushed as the Turks tried to create a national Turkish state out of the ruins of the Ottoman Empire and its panoply of religious communities.

So while the US House resolution is important, he told CT, it should not be overstated. Healing is paramount.

“The wound will remain open until full repentance for past wrongs is accomplished,” Haidostian said. “That is when new life starts.”