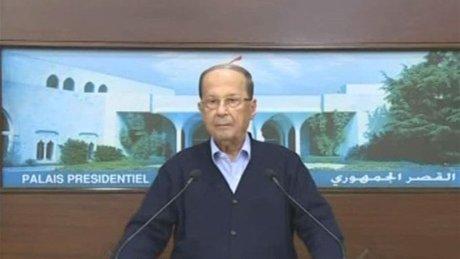 President Michel Aoun on Sunday said that “squares are plenty” in Lebanon and that “no one should think that there is a square against another.”

He was addressing via video link thousands of Free Patriotic Movement supporters who rallied near the presidential palace to voice support for his stances on the third anniversary of his election as president of the republic.

“The people have lost confidence in their state and this is a big problem,” Aoun lamented.

“We have drawn a roadmap of three points: (fighting) corruption, (fixing the) economy and (building a) civil state. The three of them are not easy to achieve,” the president added.

“We want a square composed of you and of those who protested. These three points are your right and a lot are practicing obstruction,” Aoun went on to say.

The demonstration near the presidential palace in Baabda comes after more than two weeks of widespread anti-government demonstrations.

Another such anti-government protest is scheduled for later Sunday in central Beirut.

The anti-government demonstrations have united people from the country’s many religious sects and factions against the political class.

The leaders who have ruled Lebanon since the 1975-1990 civil war are widely seen as having tanked the economy.

Aoun, one of the main targets of the protesters’ anger, gave a speech late Thursday proposing that Lebanon should move away from the decades-old sectarian political system. He said the country is at a “dangerous crossroads.”