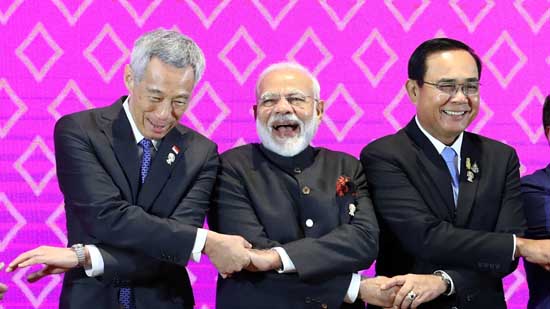 Prime Minister Narendra Modi will ride a tiger in Bangkok when he decides if India will join the Regional Comprehensive Economic Partnership (RCEP) involving half of world’s population and 40 percent of the global economy.

If India puts ink to paper, Modi could unleash a tsunami of protests at home which could leave him a loner amongst his own men and turn him into a villain in the eyes of farmers, dairy owners, the services industry and the automobile industry, at a minimum.

If India dithers on signing the pact, it could leave Modi with few friends in his neighborhood, spurn Chinese President Xi Jinping’s offer of a “100-year plan” between the two countries (as reported by Xinhua) and affect its status in other multilateral pacts, such as BRICS (Brazil, Russia, India, China and South Africa), Russia-India-China (RIC) trilateral grouping and SCO (Shanghai Cooperation Organization).

India’s commitment to Asia would appear secondary to US interests, which prefer a distrust between the two Asian giants, India and China. If RCEP has remained a stillborn child after seven years, it’s been primarily due to India playing coy.

India already has an FTA with ASEAN, so RCEP would essentially be an extension of it with six new partners. ASEAN has been of little benefit so far: India utilizes only 6 percent of it, compared to 36 percent by the ASEAN. Investment hasn’t been big either. Signing an FTA with China, which India reads as RCEP in reality, would turn the present $57 billion deficit between the two nations into an alarming proposition.

There is a history of FTAs or even Comprehensive Economic Cooperation Agreements (CECA) not working for India: It hasn’t with South Korea or Japan where imports have massively outstripped exports. India has been in FTA discussions with the European Union (EU) for a dozen years now but these appear frozen in time. The heart of the problem is two-fold: One, India lacks muscle in manufacturing; and two, FTAs never work for the service industry where India carries punch.

The best example is trade with China, where India’s service industry has largely been kept out of gate through non-tariff barriers. Indian agriculture could be swamped by China’s big state enterprises, or, say, by Fonterra of New Zealand in dairy industry. The Society of Indian Automobile Manufacturers (SIAM) is already insisting that 28 items, including hybrid, electric cars and three-wheelers be kept out of the purview of RCEP.

Red flags have also come from Modi’s own quarters. Rashtriya Swayamsevak Sangh (RSS), which is a parent body of the ruling Bharatiya Janata Party (BJP), through its offshoot Swadeshi Jagran Manch (SJM), held a 10-day nationwide protest against the RCEP this month. Various Indian ministries, including agriculture, textile, steel, and mines have either opposed it or sought protection for domestic industries. India’s Foreign Minister Subrahmanyam Jaishankar has publicly expressed his reservations about the RCEP.

The trouble is, RCEP is just not economic, it also has strategic implications. India doesn’t want to be left out of the world’s largest trading bloc. A breakthrough may have just come about in the informal summit between Modi and Xi in Mamallapuram earlier this month. Apparently, Xi looked at a bilateral protocol within the RCEP to assuage India’s trade worries. He publicly said that India’s concerns would be taken into account though he didn’t mention RCEP.  Chinese news agency Xinhua said Modi is willing to join RCEP if it is balanced and equitable and this could lead to a separate India-China protocol under RCEP.

It’s a tightrope walk which could test the most astute of statesmen. India wants to protect its economy but it also doesn’t want to be absent when East and South-East Asia is being integrated. India and China could make up more than 75 percent of $250 trillion which the RCEP economies could generate by 2050. If Modi manages to be on good terms with the tiger, he might as well ride it to sunset.

By Ashish Shukla, a senior journalist and geopolitical analyst based in India, author of ‘How United States Shot Humanity’. He runs the NewsBred website.