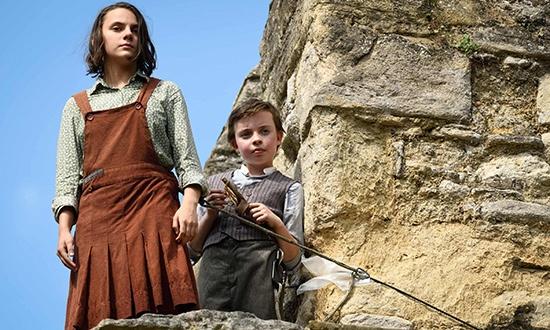 Religion, mortality and talking animals combine to gift us a series that captures Pullman’s magnum opus in all its glory

I suppose kicking off the Christmas programming season with an eight-part adaptation of a book about the death of God makes sense in this crazy, mixed-up world of ours.

Philip Pullman’s His Dark Materials is a deep, rich brew delivered via a ripping yarn about Lyra Belacqua, an orphan who journeys from an alternative Oxford – lit by naphtha lamps and traversed by airships – to the frozen north to rescue her friend Roger from child-snatchers. She becomes embroiled in a deeper mystery involving her explorer uncle Asriel, his discovery of elementary particles known as Dust and possible parallel worlds that the all-controlling Magisterium wants to keep hidden. From there arise questions about the value of organised religion, the corruptibility of authority, the ambiguity of truth, what we mean by souls (embodied by the daemons all characters have, who represent their inner essences) and other such moral and theological considerations.

Jack Thorne, the writer of acclaimed work from the This Is England series (with Shane Meadows) to National Treasure and most recently The Accident, is the man in charge of adapting Pullman’s magnum opus for the small screen. This series covers the first book, Northern Lights, and a second one, covering The Subtle Knife, has been commissioned. There is time and space to do them justice and the first episode, in all its steampunkish glory, gave every sign that the potential is to be realised. We begin with Lyra – a fierce, intelligent performance by 14-year-old Dafne Keen – being delivered for safekeeping to Jordan College by Lord Asriel (James McAvoy), invoking the principle of “scholastic sanctuary”. It’s a phrase that encapsulates so much of what drives the first part of the story, and is a sure sign to fans that they can relax and enjoy what’s to come.

The opening episode covers the abduction of Gyptian child Billy and his people setting off up the river to find him, the master of Jordan’s attempts to poison Lord Asriel, Lyra’s discovery of Dust, her (re-) abandonment by Asriel, her acquisition of the all-important alethiometer, the arrival of Mrs Coulter (a fantastically unsettling Ruth Wilson) into her life and Lyra’s acceptance of the offer to become her assistant. She and Coulter board an airship and begin their journey to London, where her new friend promises to locate the missing Roger. Meanwhile, the Magisterium, its emissaries and its powers thrum in the background.

Whatever flaws may develop as the eight episodes unfold, the show has vehemently eschewed repeating those of the dismal 2007 film, which (after much supposed studio interference) excised most of the questioning of the church and other such tricky subjects that don’t traditionally play well in the US. Despite the new series being a BBC co-production with HBO, it looks so far as though these ideas will not be compromised this time round.

So much so, in fact, that there have been concerns raised that this is too dark to be suitable for children. But children will take from the material whatever they are ready for – be it insights into the convoluted heart of man, or delighted fascination at the idea of having a talking animal to accompany you wherever you go.

And, just occasionally, the material will ready them for something else. That is what books – and prestige TV dramas – are for. Especially in a world where notions of fact, heresy, truth and who gets to define and censor them all need to be interrogated more urgently than most of Pullman’s young readers yet know.