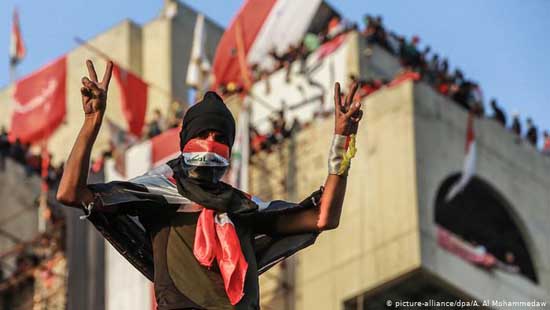 Prime Minister Adel Abdul-Mahdi has called on anti-government protesters to reopen roads, saying they have achieved their goal. But with nothing really changed after a month, the protests show no signs of abating.

Tens of thousands of Iraqi protesters shut down Baghdad and parts of the country’s south on Sunday as embattled Prime Minister Adel Abdul-Mahdi called for life to return to “normal.”

A monthlong protest movement driven by discontent over corruption and economic hardship is gaining increasing momentum, with teachers, students and unions joining demands for wholesale political change. More than 250 people have been killed by security forces and Iran-backed Shia militia.

In statement published on Sunday evening, Abdul-Mahdi said the protests “shook the political system” and achieved their purpose.

In recent days, thousands of protesters have blocked operations at Iraq’s main port, Umm Qasr, near the oil-rich city of Basra. Elsewhere, protesters have brought economic life to a standstill in Baghdad and the majority-Shiite south.

“Threatening the oil interests and blocking roads leading to Iraq’s ports is causing big losses exceeding billions of dollars,” Abdul-Mahdi said, adding the impact on imports of basic goods was driving up prices.

The prime minister’s call is likely to fall on deaf ears, with Iraqis tiring of repeated unfulfilled promises and political corruption while the country lacks basic services.

“We decided to cut the roads as a message to the government that we will keep protesting until the corrupt people and thieves are kicked out and the regime falls,” Tahseen Nasser, a 25-year-old protester in the eastern city of Kut, told Agence France-Presse.

The government has proposed hiring more people in the bloated public sector, social welfare plans and early elections once a new voting law is passed.

Last week, President Barham Salih said the prime minister is willing to resign once political leaders agree on a replacement and an election law is implemented.

Political machinations in Baghdad have cast the spotlight on Iran, which backs militia and is close to a number of the main political parties. Highlighting Iran’s sway, Qassem Soleimani, the powerful general of Iran’s Islamic Revolutionary Guard Corps elite Quds force, flew to Baghdad last week to intervene in order to ensure an influential Shiite political party did not abandon Abdul-Mahdi.

Iran’s influence in the country has drawn the ire of protesters across sectarian lines, who have attacked symbols of Iran’s clerical leadership. Even Iraq’s Shiite clerical establishment has backed protesters and urged Iran to stay out of Iraq’s political affairs.

On Sunday, protesters in Karbala attacked Iran’s consulate, days after more than a dozen protesters were killed in the Shiite holy city.