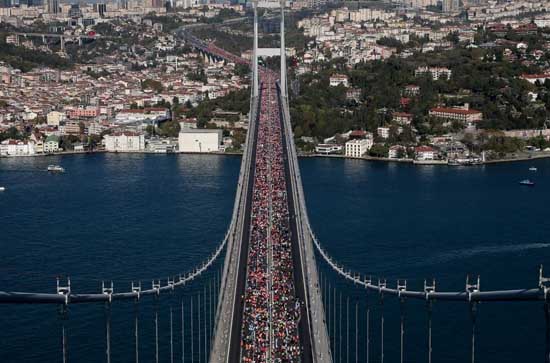 A total of 63 elite athletes joined the Vodafone 41st Istanbul Marathon, which started at 09.00 am local time from Istanbul’s Asian side and ended in the European part of the city.

The runners from 106 countries competed in Nov. 3’s race as thousands of people are also attending the 8-km FunRun.

The finish line is located in the historic Sultanahmet Square on the city’s European side. The motto of the 2019 marathon is “Istanbul is yours. Don’t stop, run!”

The Istanbul marathon has been in the Gold Label Road Races list of the international governing body for athletics, the IAAF since 2012.

The champions in recent years such as Elias Kemboi Chelimo from Kenya (2015), Evans Kiplagat from Azerbaijan (2016), French athlete Abraham Kiprotich (2017) and Kenya’s Felix Kimutai (2018) are running to win the 2019 title.

In women’s category, Ethiopian Fatuma Sado, who came third in 2018 and locally famous Turkish athlete Elvan Abeylegesse, who ranked fifth in 2018, are the favorites for the marathon.

In addition, the roller skate running made debut in Nov. 3’s Istanbul marathon.

Celestina Diaz de Valdez said that it was her first time at the Istanbul Marathon and it was a “wonderful” feeling to cross to Europe from Asia.

She recalled that she previously joined the races in many countries such as Paraguay, Korea, U.S. and South Africa, adding that she also plans to take part in next year’s [2020] marathon.

Valdez is the first woman who competed in Istanbul’s race from Paraguay.