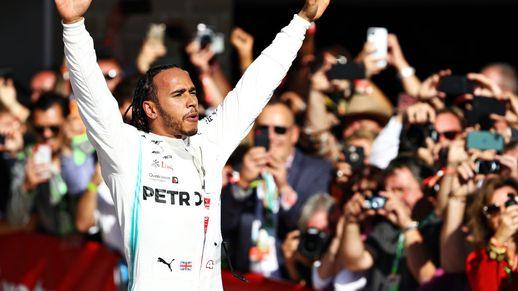 Sporting Life · Columnist
Lewis Hamilton wrote his name into the pantheon of Britain’s all-time sporting greats by winning his sixth Formula One world championship in Texas.

The 34-year-old moved above the sport’s Argentinian godfather Juan Manuel Fangio and within striking range of Michael Schumacher’s record collection of seven after he took the chequered flag in Texas in second place.

Hamilton was required to finish only in the top eight to be certain of clinching the championship here.

Valtteri Bottas did all he could to take the title fight on to Brazil by passing Hamilton, on a different strategy to his Mercedes team-mate, for the victory with four laps remaining.

Red Bull driver Max Verstappen ran Hamilton all the way to the line, but finished just eight tenths of a second behind the Englishman.

“Get in there, Lewis,” came the roar from Hamilton’s race engineer, Pete Bonnington. “That is it. Champion of the world. You did that in style, mate.”

“Still we rise, guys,” replied an emotional Hamilton. “What an incredible weekend. To everyone that came out, I cannot believe it. I really can’t believe it.”

Hamilton parked up in the spot reserved to celebrate his world championship.

Still sitting in his car, he removed his helmet and balaclava before standing on top of his silver machine and lapping up the adulation of the crowd. He then ran into the arms of his Mercedes mechanics to celebrate before retrieving a Union flag.

“It is overwhelming if I am honest,” said Hamilton. “I feel so much emotion.

“I have got my mum and dad here, my step-mum and step-dad here. It is an honour to be up there with the greats. My dad told me when I was six or seven never to give up – that is the family motto.

“I was pushing as hard as I could today and I was hopeful I could win but I didn’t have enough left in the tyres.

“I don’t know about how many championships I can win, but as an athlete I feel as fresh as I could be. We will keep pushing.”

After the 34-year-old navigated his way safely through an opening lap fraught with danger, his fifth championship in six years rarely looked in doubt.

With history beckoning, he might have been forgiven for slotting in behind Sebastian Vettel – but that is not his style.

Hamilton launched an audacious move around the outside of the Ferrari driver at the right-handed Turn 8 before making the passing move stick into the fast-approaching ninth bend. Hamilton’s intent was clear.

Bottas was keeping to his part of the bargain. A fine start from pole saw him lead ahead of Max Verstappen with Ferrari’s Vettel out because of a left-rear suspension failure.

Red Bull blinked first, bringing Verstappen in on lap 13 for the first of two scheduled stops. Mercedes moved to cover off the Dutchman by stopping Bottas for rubber on the following lap.

Hamilton now led. The objective for the number 44 car was to get to the end of the race on a one-stop strategy. He made it work in Mexico last weekend to claim a surprise win and hoped to do it again to celebrate another title with an 84th career win in his 248th start.

He resisted a call to stop for rubber on lap 23 but after Bottas passed him, came in the next time around. He was tasked with massaging his tyres for 32 laps – just over 100 miles.

With 21 and 20 laps remaining, Verstappen and Bottas pulled into the pit lane for their respective second stops. Hamilton’s lead over his Mercedes team-mate was nine seconds.

On lap 51, the two Mercedes cars ran side-by-side in the duel for victory, with Bottas running off the road to avoid contact with his team-mate. But on the following lap, the Finn cruised past.

Verstappen tried but failed to pip Hamilton to the runner-up spot, with Leclerc finishing fourth.

Hamilton was greeted in the cool-down room by Vettel, who congratulated his peer. Between them they now have 10 world titles.

The Briton’s father, Anthony, step-mother, Linda and paternal mother Carmen stood underneath the podium to watch their son open the champagne.

Mercedes boss Toto Wolff said: “Lewis is still very motivated and you can see he wants to win every single race.

“As long as that is the case, I think he can go for more. There is no limit.”