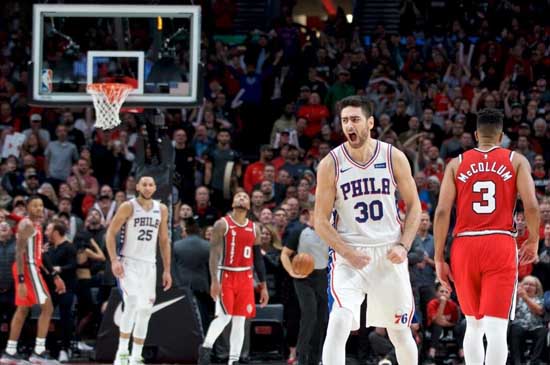 Turkish international Korkmaz scored the go-ahead 3-pointer with only 0.4 seconds to go, as the 76ers beat the Blazers 129-128 at Blazers’ home to start the season with 5 wins and no losses.

The 76ers were down as much as 21 points in the game, but a resilient effort in the end of the 3rd quarter and the start of 4th quarter kept them alive.

The hero of the game was Furkan Korkmaz as he scored 11 points, grabbed 3 rebounds and made 2 assists of the bench. Al Horford scored 25 points, made 7 assists, and rabbed 5 rebounds, while Tobias Harris chipped in 23 points in the win.

Philadelphia 76ers played without their star Joel Embiid because of scuffle with Karl Anthony Towns, which the NBA said “an on-court altercation” and “their continued escalation” over the social media.

Both players were suspended for 2 games after the incident.

For the Trail Blazers, Damian Lillard scored 33 points, Mario Hezonja made a “double-double” with 11 points and 12 rebounds but these performances were not enough to beat Korkmaz and the 76ers.

The Detroit Pistons defeated the New Jersey Nets on Nov. 2 evening with a 113-109 score at home, Little Caesars Arena, where Andre Drummond put on a dominant effort.

Drummond’s impressive statistic was the first since 1989, when Hakeem Olajuwon made at least 25 points, grabbed 20 points, dished out 5 assists, blocked 5 shots and made 3 steals in a single game.

For the Nets, Kyrie Irving made his third career triple-double with 20 points, 11 rebounds and 10 assists in the losing effort.

Other results in NBA