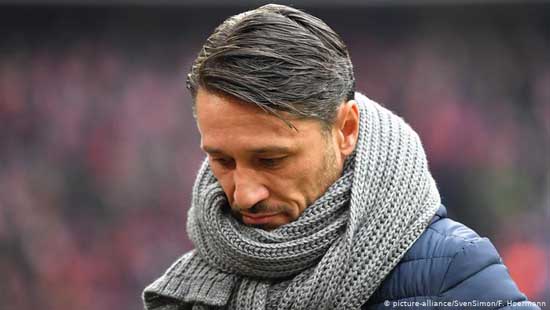 A shambolic showing in Frankfurt cost Bayern Munich head coach Niko Kovac his job. With the record champions more vulnerable than they’ve been in years, DW’s James Thorogood believes there was no alternative.

The team that shot him to prominence ultimately proved to be Niko Kovac’s demise, as the footballing gods demonstrated just how cruel their sense of humor is.

After all, it was a 3-1 loss to Eintracht Frankfurt in the 2017 German Cup final that confirmed to Bayern Munich bosses that they had made the right call in handing Niko Kovac the most demanding coaching role in German football and a 5-1 defeat to the Eagles that convinced them to relieve him of it.

The German record titleholders’ biggest defeat in a decade barely scratches the surface of the problems that have arisen in light of recent events in Bavaria.

It’s first worth pointing out that Kovac deserves great credit for taking the reins at Bayern during a period of turbulent transition and guiding them to a domestic double. No one can deny him that achievement, but despite delivering the silverware demanded the doubts as to whether he could meet the extreme standards of the elite level never dissipated.

With Pep Guardiola, Carlo Ancelotti and Jupp Heynckes as his predecessors, the bar was set extremely high for the 48-year-old. But while the illustrious trio regularly talked fondly of their time at former clubs during their time in charge of Bayern, would any of them have referred to an opposing set of fans as “the best in the league,” as Kovac did before the Frankfurt game?

The answer is no, because statements like that aren’t befitting of the role of Bayern head coach. Neither is undermining the status of a key player with great standing, as Kovac did when claiming that Thomas Müller would feature when there was a “personnel emergency.”

Off the pitch, the club’s hierarchy assembled before the press on multiple occasions to demand more respect for Kovac’s approach and results. However, with reports of a political tug of war raging behind the scenes, their attempts did more to erode his credibility in the eyes of players and fans than they did to provide a firm foundation.

Bayern had no choice

On the pitch, you’d have to go back to the pre-Louis van Gaal era for the last time Bayern Munich looked this vulnerable and, while injuries have played their part, they can’t shoulder all the responsibility. Since the 7-2 win over Tottenham in the Champions League, Bayern performances have been almost unrecognizable, littered with mistakes, defensive naivete and overly-reliant on moments of goalscoring ingenuity from Robert Lewandowski.

No longer the all-conquering dominant force, the fact that none of Bayern’s competitors were capitalizing appeared to be Kovac’s only saving grace. In the end, though, the Croatian’s actions rendered his position untenable and left Bayern with no grace left to give. Kovac’s tenure was threatening to become divisive and, with the club’s identity on the line during a time of intense transition, Bayern had no choice but to nullify the threat.