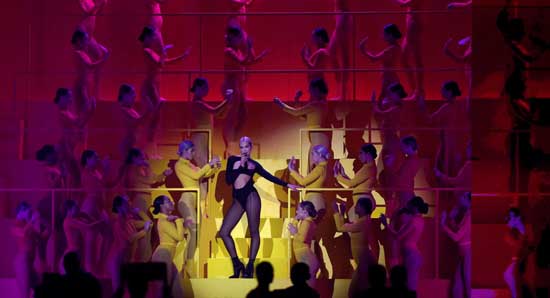 Pop superstar Dua Lipa crushed it at the 2019 MTV Europe Music Awards in Seville, Spain, on Sunday, as she opened the show with her new single, the disco-inspired “Don’t Start Now”.

Pop singer Dua Lipa had all eyes on her at the 26th MTV Europe Music Awards (EMA), which was hosted by the FIBES Conference and Exhibition Centre on Sunday, with her new single Don’t Start Now.

The London-born singer, 24, had all eyes on her as she opened the spectacular ceremony in a risqué black cut-out thong leotard, sheer stockings with black piping running along the central panel, and satin heeled boots.

For the glittering event that celebrates the best of music from around the world, Dua had changed out of her black floor-length red carpet dress and appeared perfectly in her element, surrounded by her dancers, who were clad in eye-popping neon yellow bodysuits.

The killer performance had excited fans, who have posted rave reviews on social media:

Earlier, the Don’t Start Now hitmaker had opened up on what fans can expect from her new album, which had been eagerly anticipated since her acclaimed 2017 self-titled debut. The singer-songwriter confessed it is a mix of both her old music and also some new genres.

​Speaking about her new song, she said at the award ceremony:

“It’s very disco-orientated. I guess I got a lot of inspiration from ‘Electricity’ and ‘One Kiss’; it felt like the natural progression. The album is really nostalgic with new sounds.”

Danny Trejo: The actor who went from prisoner to film star