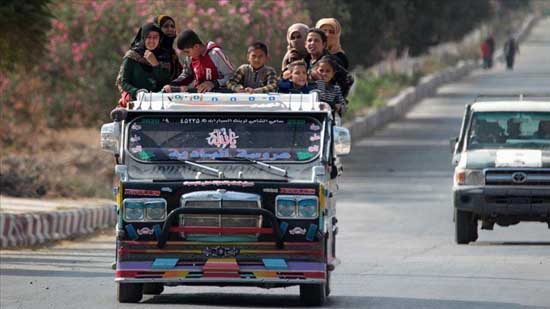 Turkey‘s military sources on Nov. 1 announced that Syrians who hear of the comprehensive security measures taken in Tal Abyad and Ras al-Ain are returning back to the area.

The Turkish National Defense Ministry stated that improvised explosive plant of YPG/PKK terror group was destroyed and 1 ton of ammonium nitrate was seized in Tal Abyad.

“Over 400 mines and improvised explosives and a bomb-laden vehicle were destroyed during Turkey’s anti-terror operation in Syria,” the ministry said.

A joint patrol of Turkey and Russia took place in northern Syria at 40 kilometers (25 miles) east of Ras al-Ain and 30 km (18.6 mi) west of Qamishli city, the ministry added.

Col. Olcay Denizer held a press conference on the latest developments in Operation Peace Spring and how the Turkish Armed Forces (TSK) proceed with the operation in a sensitive manner with national and moral values.

Denizer stated that the tunnels, built especially in residential areas, are being identified and filled with concrete, one by one.

The colonel noted that 18 regime soldiers, two of whom were wounded in the operation area, were handed over to Russian forces.

“In line with the agreement reached on Oct. 22 in Sochi, negotiations were held with the Russian delegation who came to Ankara on Oct. 28-30 to plan the military activities.

“In this context, the first patrol activity began at 12.00 [0900GMT] today [on Nov. 1]. The patrol was carried out with the participation of eight armored vehicles, four of which were Russian, under the escort of an unmanned aerial vehicle of the Turkish Armed Forces in the east of the Operation Peace Spring zone,” Denizer said.

Military sources stressed that within the joint patrol, the withdrawal of PKK/YPG terrorists from the region would be monitored by the land and air forces.

“The Turkish Armed Forces have no activity in [the towns of] Tall Tamr and Ain Issa.

“There is certain disinformation but the Turkish Armed Forces do not target civilian settlements, historical structures and national cultural structures,” Denizer said.

Denizer added that they were in constant contact with Russia in Syria and sharing all necessary information to prevent unwanted conflicts.

At least 94,000 civilians have returned to areas liberated by Turkey’s anti-terror operation in northern Syria over the last 10 days, the UN said on Nov. 1.

At the beginning of Operation Peace Spring, there were over 200,000 people who had left their homes, Jens Laerke, spokesman for the UN Office for the Coordination of Humanitarian Affairs (OCHA), told Anadolu Agency.

“Now, we are seeing a movement of return. Today, we have about 94,000 who have returned to areas that are now effectively under Turkish control,” said Laerke.

There remain just over 100,000 displaced people, he said.

“We can see that the numbers are going up. And if that trend continues, of course, more people in the coming days and weeks will return to their home,” said Laerke.

Laerke described the situation in the region as “dynamic”.

UN to engage with Turkey over safe zone settlement

The United Nations refugee agency UNHCR will engage with Turkey over its plan to resettle as many as 2 million Syrian refugees back across its southern border, the world body announced.

The announcement came after one hour of closed-door talks between Turkish President Recep Tayyip Erdoğan and UN Secretary-General Antonio Guterres on Nov.1 at Vahdettin Pavilion in the historic city of Istanbul.

“President Erdoğan presented the Secretary-General with a Turkish plan for new settlement areas for the return of Syrian refugees,” UN spokesman Farhan Haq told reporters in New York on Nov. 1.

“The Secretary-General stressed the basic principles relating to the voluntary, safe and dignified return of refugees. He informed the president that UNHCR will immediately form a team to study the proposal and engage in discussions with Turkish authorities, in line with its mandate.”

Guterres also expressed his “deep appreciation” for Turkey’s support, including by hosting the UN Technology Bank, supporting development work across the region and working to combat the threat of climate change, said Haq.

“They also had a constructive exchange of views on a number of ongoing situations in the region, including Yemen, Libya and the Middle East peace process, as well several additional issues of mutual concern in other parts of the world,” added Haq.

Ankara wants YPG/PKK terrorists to withdraw from the region so that a safe zone can be created to repatriate some 2 million refugees.

On Oct. 22, Erdoğan and Putin held a meeting in Russia’s Black Sea resort town of Sochi.

Ankara and Moscow reached a deal under which YPG/PKK terrorists will pull back 30 kilometers (18.6 miles) south of Turkey’s border with northern Syria within 150 hours, and security forces from Turkey and Russia will conduct joint patrols there.

The U.S.-backed SDF, a group dominated by the YPG, has been controlling some 28 percent of the Syrian territories, including the most of the 911-kilometer-long Syria-Turkey border.