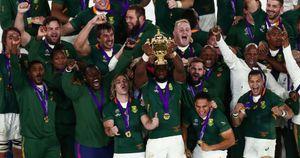 Eddie Jones’ side, who arrived late to the stadium, lacked the composure, cutting edge, organisation and execution of their semi-final performance and were made to pay by Handre Pollard’s boot.

In the 2007 final, Percy Montgomery claimed all the points for the Springboks, and this time it was Pollard’s kicking that punished England, hitting four penalties in the first half to give his side a 12-6 lead.

No team trailing at half-time had ever come back to win the final and lift the William Webb Ellis trophy, and as much as England improved in the second period they could never get fully back into the match.

After captain Owen Farrell and Pollard traded two more penalties apiece, as well as missing one each, the deciding moment game on 66 minutes as winger Makazole Mapimpi went over for the first try after a clever chip and chase.

And England pushed to make something happen in the final minutes they lost the ball on halfway and winger Cheslin Kolbe ran 30 metres, beating three tacklers to score a wonderful try and seal victory for South Africa.

History was made, as Siya Kolisi became the first black South African captain to lift the William Webb Ellis trophy.

England captain Owen Farrell said: “We didn’t start the game well and had a disappointing first half.

“I am proud of this group, what we’ve done and how far we’ve come over the course of this tournament and that showed in the character and fight we showed in the second half.

“But credit to South Africa, they were very good today.”

South Africa captain Kolisi said: “The team has gone through a lot and the team has faced a lot of challenges.

“We have a lot of problems in our country. But this team is from so many different backgrounds and races and we’ve come together to achieve one goal. We’ve done it and shown what’s possible.

“I hope we’ve done South Africa proud and show if we pull together as one we can achieve anything as a country.”

After flying out of the blocks against New Zealand a week earlier, England were ambushed by South Africa’s instant ferocity and never truly recovered.

Seeing prop Kyle Sinckler knocked out inside three minutes and unable to return was a savage setback – but it was only the beginning of their problems as panic swept through Red Rose ranks.

Nowhere was their vulnerability more evident than at the scrum where Tendai Mtawarira tormented Sinckler’s replacement Dan Cole to win a series of penalties that placed South Africa in full command.

Willie Le Roux glided into space and Pollard forced a gap as the Springboks poured forward and when a penalty came at the breakdown, Pollard drew first blood.

Ben Youngs joined Farrell and Billy Vunipola in flinging out a wild, misjudged pass as England continued to invite pressure but they sprung into life on their first visit to the opposition 22 with the Vunipola brothers making thunderous carries.

The passage of play was ended by three points from Farrell but it also delivered a blow to South Africa, who lost hooker Mbongeni Mbonambi and lock Lood De Jager to injury.

Another scrum penalty allowed Pollard to regain the lead and when Ford kicked out on the full, there were strong hints that England were not close to the levels produced when beating the All Blacks.

England did threaten again with a sustained onslaught lasting 26 phases, once more led by the Vunipolas but with assistance from Manu Tuilagi, and they were only kept at bay by desperate defending before collecting another three points through Farrell.

South Africa continued to squeeze and smother, especially at the scrum, and when Pollard was on target with two additional penalties they led 12-6 at half-time.

With Joe Marler’s arrival, fortunes changed and referee Jerome Garces reacted as South Africa were sent into full retreat, Farrell making the most of the opportunity by nailing his kick to reduce the deficit to one penalty.

An exchange of penalties followed but suddenly the Springboks no longer needed the boot of their hard-running fly-half as first Mapimpi and then Kolbe plundered superb tries which ultimately confirmed England’s fate.

Both took advantage of tiring English legs, stamina sapped by the sustained battering they had taken at the hands of worthy winners as South Africa upset the odds and won handsomely.