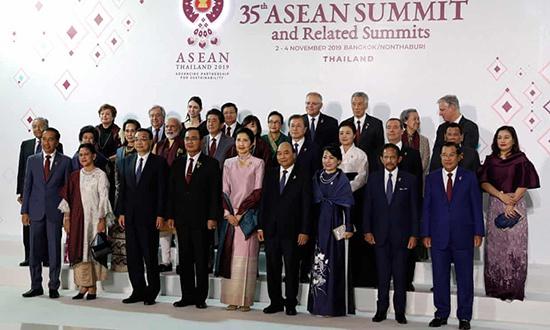 Asean leaders pose for a family photo at the Bangkok summit. The globe’s largest trade deal – the RCEP – is unlikely to be signed this year. Photograph: Dmitry Astakhov/Tass

The world’s largest trade deal is unlikely to be signed this year, with a draft statement from south-east Asian leaders suggesting it will be delayed until 2020, despite China’s desire to bring it into operation as soon as possible as a counterweight to its debilitating tariff war with the US.

The 16-country Regional Comprehensive Economic Partnership – known as the RCEP – would be the world’s largest when operational, spanning India to New Zealand, including 30% of global GDP and half of the world’s people.

But resistance from India – concerned about a flood of cheap mass-produced Chinese goods hurting small businesses in its economy – appears set to cruel hopes of finalising the pact at the Association of Southeast Asian Nations summit in Bangkok, where members of the 10-nation bloc have been joined by the leaders of powerful observer nations India and China for the East Asia Summit.

On a bilateral level, the Chinese premier, Li Keqiang, has met the Australian prime minister, Scott Morrison, on the sidelines of the Bangkok meeting, offering to help get the China-Australia relationship “on the right track”.

“We are ready to work with the Australian side to keep our relationship on the right track, deepen our mutual trust, and jointly maintain regional and global peace,” Li told Morrison.

He said he wanted to expand business links and improve “people-to-people exchange”. “This is to the benefit of both sides. We hope our relations will move in the direction of steady and sound growth.”

Sino-Australian relationship have been scarred by a number of long-running issues, including the detention of the Australian citizen Yang Hengjun, human rights abuses inside China, the militarisation of the South China Sea, and allegations of foreign interference in politics, business and education. Inflaming these has been an increasingly uncompromising rhetoric from politicians and ministers on both sides.

Morrison told Li that Australia “greatly appreciates” its relationship with China, its largest trading partner. “This is an opportunity, among others, to talk about that relationship,” he said. “Like you, I feel very strongly and am committed to improving that relationship and ensuring we realise its full potential.”

The RCEP, of which Australia has been a key supporter over years of uneven negotiation, is essentially complete, save for the objections of one member, understood to be India.

“Most market access negotiations have been completed and the few outstanding bilateral issues will be resolved by Feb 2020,” said a draft agreement obtained by Agence France-Presse.

The statement said the text of all 20 chapters was now complete “pending the resolution of one” member.

But it said all members were “committed to sign the RCEP” next year in Vietnam, which will take over the Asean chair. The RCEP will cover the 10 countries of Asean – Brunei, Cambodia, Indonesia, Laos, Malaysia, Myanmar, the Philippines, Singapore, Thailand, and Vietnam – plus India, Japan, China, South Korea, Australia and New Zealand.

Delhi is worried that small businesses across India would be hard hit by an unrestrained influx of cheap Chinese goods. It is also protectionist by instinct, resistant to the removal of agricultural tariffs impacting upon the country’s small-scale farmers.

“Bridging those divides is probably the biggest challenge that’s ever been faced in terms of a trade agreement being signed and sealed around the world.”

The RCEP will be negotiated further at a summit on the sidelines of the East Asia Summit on Monday.