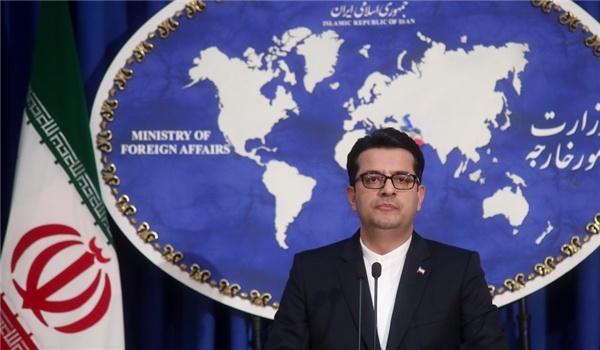 TEHRAN (FNA)- The Iranian foreign ministry on Monday strongly dismissed a report by the Wall Street Journal claiming that Tehran had recently asked for the start of US consular services through the Swiss mission which represents the US interests in Iran.

Foreign Ministry Spokesman Seyed Abbas Mousavi in a statement “strongly rejected the claim of a US official in the Wall Street Journal that Iran has requested the opening of a US consular service at the Swiss embassy in Tehran”.

The WSJ quoted a US official as claiming that Iran had recently asked for the creation of a consular service through the Swiss embassy.

Iran, this US official claimed, hopes the consular service can be used to facilitate negotiations over prisoner swaps. The Trump administration hasn’t responded to that request, according to the paper.

Mousavi had in September voiced his country’s readiness for prisoner swap with the US in a bid to put an end to further violation of human rights against the nationals of his country in American jails.

“The Islamic Republic of Iran, as also announced by (Foreign Minister Mohammad Javad) Zarif, is ready to start talks about a prisoner swap,” Mousavi said at the time.

The Iranian official made the comments at a presser on the release of an Iranian woman after spending over two years behind bars in Australia and the US.

Also in September, Iranian President Hassan Rouhani reiterated Tehran’s preparedness for a prisoner swap with the United States, saying, “We have talked and negotiated several times with American officials in the past for the release of the two sides’ prisoners and sometimes we have been successful.”

Speaking at a press conference in New York, which marked the end of his participation in the 74th annual session of the UN General Assembly, he, however, emphasized that “the ball is in the US’ court” now.

Rouhani referred to the release in June of Lebanese national Nizar Zakka, who has US permanent residency and had been imprisoned for four years after being convicted of spying for the United States.

On April 24, Foreign Minister Zarif said that Iran was ready for prisoner swap with the US.

On the sidelines of an event at the Asia Society in New York, Zarif told Reuters he was proposing “a serious dialogue” with the United States on a possible prisoner swap.

Zarif was in New York to attend a UN conference dubbed “the International Day of Multilateralism and Diplomacy for Peace”.

Soon after Zarif’s remarks, the US State Department rejected a swap deal and asked Iran to release American inmates unilaterally.

“We are aware of Foreign Minister Zarif’s recent comments to a NGO in New York regarding wrongfully detained Americans in Iran. We note his reference to a humanitarian resolution of those cases, which we have called for repeatedly,” a US State Department spokesperson told US-based Al-Monitor website.

Later in the day, the Iranian foreign ministry spokesman criticized the US State Department’s “hasty” reaction to FM Zarif’s proposal, and its call for the “unilateral release” of all US prisoners.

“The reaction shows they lack a proper understanding of the concepts of negotiation, agreement, and exchange,” the Iranian spokesman noted.