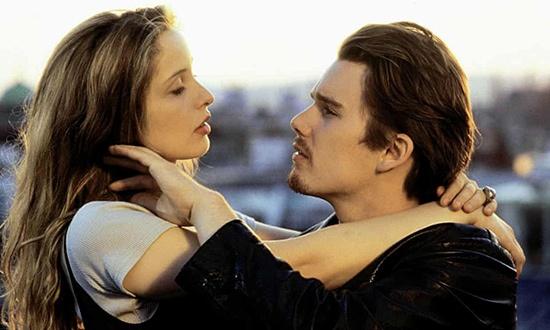 ‘Remembering that much dialogue was torture’

‘The stakes got higher’ … Delpy and Hawke as the talkative twosome, who also appeared in Before Sunset and Before Midnight. Photograph: Allstar/COLUMBIA

The original script for the first film, Before Sunrise, was believe it or not kind of devoid of romance – even though Richard Linklater, the director, had based it on a woman he spent the night walking around Philadelphia with. It was a great blueprint, but it was even more cerebral and talky. He was keen to capture something very true, so wanted the two leads to be writers on the film as well – and he auditioned us about what we wanted to say. I talked about some stuff that ended up in the film, about God existing in the space between people.

So Richard, Ethan and I produced the script together, though Ethan and I weren’t credited for Before Sunrise. The process was totally collaborative: all three of us had to agree on ideas for scenes. That’s how we did Before Sunset and Before Midnight, too. If one of us hated something, it wouldn’t make the film. From the start, those guys wanted the balance of a proper female voice. The writing was still going on during the shoot in Vienna; for example, that’s when I wrote the scene in which my character Céline makes a mock phone call to a friend and announces she’s in love with Jesse.

Remembering that much dialogue was torture – and it was even worse with the longer takes on Before Sunset, which I had suggested doing in real time. I had been going through a bit of a difficult time in the early 00s, struggling to make films as a director and I’d had some health issues. But it wasn’t directly autobiographical: like the director Krzysztof Kieślowski once told me, you take a seed of truth and make it a tree.

I had thought of the ending, where I imitate Nina Simone and tell Jesse he’s going to miss his plane, for another film I’d written. I performed it for Richard and he loved it. I wasn’t sure I wanted to give it away, but I thought: this series is more important than some film of mine I might never do. These films speak to everyone, from adolescence to the end of life; they’re not just about generation X. Really young people now even like Before Sunrise because they see their parents in Jesse and Céline. You see Ethan and I getting older as the series progresses. The films are really a study of time.

I’d been going through a really hard time with my divorce, so that summer in Paris shooting Before Sunset was extremely healing, reconnecting with Richard and Julie. She and I had done a little cameo as Jesse and Céline in Richard’s 2001 animated feature Waking Life, and we started daydreaming about how we could make another movie together.

A little later, Richard turned up to a book signing I was doing in Austin and had a flash of an idea: what if Jesse had written a book about Céline, and she turned up to the signing? There’s definitely something autobiographical in that opening exchange at the bookshop about using your own life to create art – and what the value of that is. You never really find the answers, but there’s a healthy healing process that comes from asking certain questions, and I hope the film asks them of me.

The third film, Before Midnight, was the hardest to make because the first two are about romantic projection. I felt it was important to do a corresponding film that was grounded in reality and the nature of love on a day-to-day basis. Could we make a film about a couple who’ve been together for years and raised kids, but still have it be romantic, without telling one lie? We weren’t sure the audience would like it – you wouldn’t want to see a sequel to Titanic with Jack and Rose fighting.

The structure was very challenging, too. We wanted to do a Bergman, like Scenes from a Marriage, with a sequence that starts off as a love scene, but ends in them possibly breaking up. So writing that climactic marital row scene was one of the most difficult things I’ve ever done; 30 pages, without being boring, in one single room is tough. But it works as a complete circle: the way Before Sunrise starts is this couple in their 40s fighting on the train. We realised as we filmed it: “Wow, we’ve become that couple.”

So there’s something about the trilogy that feels finished to me. Every time we make one of them, the stakes get higher. We wouldn’t want to pour any water in our beer. Which isn’t to say we couldn’t revisit Jesse and Céline; we muse on it sometimes. A fourth film would have to work in some way that broke the rhythm of this cycle, maybe to address mortality. But these three films have been a blessing in my life.