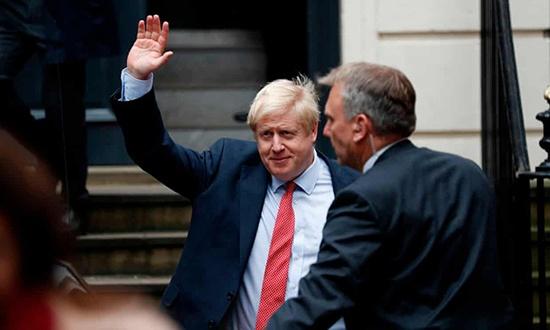 Boris Johnson has been accused of presiding over a cover-up over No 10’s refusal to allow the 50-page dossier to be released. Photograph: Adrian Dennis/AFP via Getty Images

Boris Johnson was on Monday night accused of presiding over a cover-up after it emerged that No 10 refused to clear the publication of a potentially incendiary report examining Russian infiltration in British politics, including the Conservative party.

Downing Street indicated on Monday that it would not allow a 50-page dossier from the intelligence and security committee to be published before the election, prompting a string of complaints over its suppression.

The committee’s chairman, Dominic Grieve, called the decision “jaw dropping”, saying no reason for the refusal had been given, while Labour and Scottish National party politicians accused No 10 of refusing to recognise the scale of Russian meddling.

Fresh evidence has also emerged of attempts by the Kremlin to infiltrate the Conservatives by a senior Russian diplomat suspected of espionage, who spent five years in London cultivating leading Tories including Johnson himself.

It can now be revealed that Sergey Nalobin – who once described the future prime minister as “our good friend” – lives in a Moscow apartment block known as the “FSB house” because it houses so many employees from the Kremlin’s main spy agency.

The committee’s report is based on analysis from Britain’s intelligence agencies, as well as third-party experts such as the former MI6 officer Christopher Steele, and is subject to a final clearance from Downing Street. That has to come before parliament is dissolved on Tuesday if it is to be released ahead of the election.

Downing Street sources stated that was not now expected to happen in time, claiming the sign-off process typically takes six weeks. A No 10 spokesman added: “There are processes reports such as this have to go through before publication, and the committee is well-informed of these.”

However, it is understood the dossier has already been approved by the intelligence agencies themselves as part of a long clearance process that began in late March. Downing Street was sent a final draft on 17 October and had been expected to sign off the report by the end of last week.

Grieve said: “The protocols are quite clear. If the prime minister has a good reason for preventing publication he should explain to the committee what it is, and do it within 10 days of him receiving the report. If not, it should be published.”

The dossier specifically examines Russian attempts to interfere in the 2016 EU referendum. Members of the committee – which meets in secret because of the sensitivity of its work – had wanted to make recommendations to introduce greater safeguards ahead of the December poll.

Ian Lucas, a Labour MP who sits on the culture media and sport select committee, which has conducted related inquiries into the conduct of the EU referendum said “the government needs to come clean about its view on Russian interference in British politics”.

Ministers have argued that there are no examples of successful Russian interference in UK elections, but Lucas said that this needed to be properly tested: “This decision looks like it is designed to avoid proper scrutiny of what we actually know.”

Allegations that Moscow money has flowed into the Conservative party via emigres living in the UK making high-profile donations, were also heard by the committee – although the party has consistently denied receiving money improperly.

In 2014, Lubov Chernukhin – the wife of the former Russian deputy finance minister – paid £160,000 to play tennis with Johnson and David Cameron. The match was the star lot at a Conservative summer party auction. Another guest at the 2013 fundraiser was Vasily Shestakov, Vladimir Putin’s judo partner.

Committee members were also briefed on an extraordinary – and for a while an apparently successful – attempt to penetrate Conservative circles by Nalobin, who instigated a pro-Kremlin parliamentary group, the Conservative Friends of Russia.

During his time in the UK, Nalobin went to exclusive Tory fundraising events and met senior Conservatives. In January 2014 he posed for a photograph with Johnson at an event at city hall in London. Nalobin posted it on Twitter, writing in a caption that the then mayor was “our good friend” who said “warm words” about Russians.

Conservative Friends of Russia held its 2012 launch party in the Russian ambassador’s Kensington garden, with about 250 Russian and British guests present, including Tories who went on to play a prominent role in the referendum campaign. One was Matthew Elliott, now chief executive of pro-Brexit group Vote Leave, alongside Dominic Cummings, now the prime minister’s chief strategist.

Another guest was Johnson’s future girlfriend Carrie Symonds, a Tory party activist. At the time she worked in the office of John Whittingdale, the pro-Brexit MP who was the group’s honorary vice-president. The group collapsed after revelations of Nalobin’s alleged ties with the Kremlin’s SVR foreign intelligence agency.

Over the weekend, the shadow foreign secretary, Emily Thornberry, raised questions over Cummings’ connections to Russia, and the levels of security vetting to which he had been subject, after an official whistleblower raised concerns with her.

Thornberry asked if Cummings had been asked about his relationship with members of Conservative Friends of Russia, as well as the purpose of his three-year period of work in post-communist Russia between 1994 and 1997.

The Guardian’s investigation was carried out with the The Insider, an independent Russian news website. Property records show that Nalobin owns an apartment at Michurinskiy Prospect 27, in south-west Moscow. The block’s ties with state spying are so well established that sellers are able to advertise their properties in the “FSB house” at above market rates.

Peers held a special debate about the withheld dossier, after an urgent question from the cross-bench peer David Anderson, a national security expert, who insisted the delay was unjustified. “It invites, I’m afraid, suspicion of the government and its motives,” he said.

Earl Howe, responding for the government, told peers: “The length of time that the government had had for this report is not at all unusual. It was delivered on 17 October – that is not a very long time ago. And the prime minister is entitled to take his view on what the report contains.”

Stewart McDonald, the SNP’s defence spokesman, said: “Parliament is about to be sent packing into a general election without fully understanding the extent to which Russia has meddled in our most recent democratic electoral events.”