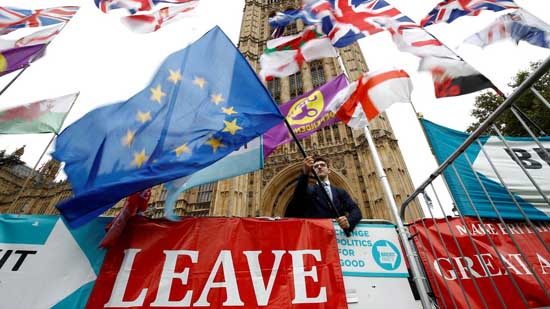 A report which allegedly puts to bed the notion that Russia meddled in Brexit won’t be published before the upcoming general election, sparking outrage from those convinced Moscow swayed the vote, despite evidence to the contrary.

Downing Street has blocked the publication of the 50-page report from the Intelligence and Security Committee (ISC), which probed allegations that Russia interfered with the 2016 Brexit referendum. The report was sent to the government on October 17 and was due to be published on Monday.

No. 10 said it would not approve publication of the document before Parliament was dissolved on Tuesday evening, which effectively means it won’t be made public before the December 12 election. A government spokesperson said that “there are processes” such reports must go through before being released and that the ISC is “well informed” of those processes.

The report is said to examine claims that Russian money influences British politics and that Moscow attempted to sway the 2016 vote in support of Brexit. Despite the allegations, however, sources “with direct knowledge” of the reports’ contents told BuzzFeed that there has been no evidence found by the committee that Russia meddled with Brexit or the 2017 general election. That finding was “categorical,” according to one of the sources, the website reported.

It’s not the first time that cold water has been poured on the notion of Russian interference in Brexit. An investigation by Facebook last year probing the claims also failed to bring to light any evidence whatsoever.

A year before that, researchers at Oxford also insisted that any ads purchased by Russia-based Facebook accounts were “not significant” and could not realistically have impacted the vote in any way. One researcher clarified that “there seems to not be much Russian activism” in relating to Brexit.

Opposition MPs, however, are accusing Prime Minister Boris Johnson of trying to cover up the contents of the report ahead of the crucial general election, suggesting that he must have something to “hide.”

ISC committee chairman Dominic Grieve has complained about the delay. “If the prime minister has a reason why he can’t publish or doesn’t wish this report to be published, we need to know about it please,” he said at the weekend.

Many of the usual suspects were called upon by the committee to give written evidence on Russia’s supposed election interference activities. The list includes Christopher Steele, the British ex-spy responsible for penning the infamous ‘dossier’ on US President Donald Trump’s mythical collusion with Russia — a conspiracy theory rubbished by the release of the Mueller report earlier this year.

British investor Bill Browder, who is wanted by Moscow for fraud, also gave evidence on “Russian operations” in the UK and said he was “disturbed” by the delay in releasing the report.

Following on from three years of Russiagate conspiracy theories in the US, anti-Russia hysteria has seemed to kick into high gear in Britain in recent days.

Johnson adviser Dominic Cummings has been questioned about his ties to Russia after a whistleblower raised “serious concerns” over “relationships” he cultivated during a three-year work stint there between 1994 and 1997, as well as his relationship with the Conservative Friends of Russia group.

“I think that had there been any evidence, very strong evidence, that Russia had been interfering in the 2016 referendum or 2017 general election, then the government would have brought it to public attention,” historian Martin McCauley told RT, adding that Johnson likely does not want any conflict with Russia and that “his main concern is Brexit.”

“It could be that opposition parties will try to bring this subject to public attention if they can, but of course they must discover what is in the report and they would like it to be Borisgate or Russiagate, so as to embarrass the present government,” he said.