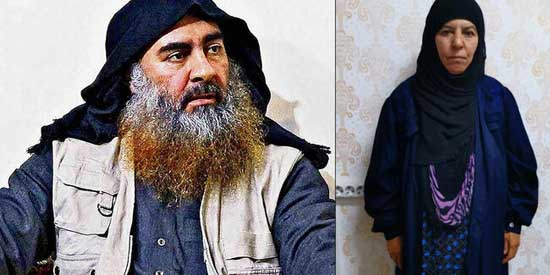 Turkey has captured and arrested the sister of dead ISIL ringleader Abu Bakr al-Baghdadi on Nov. 4, according to Turkey’s communications director.

“The arrest of al-Baghdadi’s sister is yet another example of the success of our counter-terrorism operations,” said Fahrettin Altun, Turkey’s communications director, in a tweet.

“Turkey’s fight against terror regardless of its ideology or origin continues unabated,” he added.

U.S. President Donald Trump had announced that al-Baghdadi had been killed in a late-night raid in northwestern Syria’s Idlib province.

Altun underlined Turkey’s unquestionable determination to bring justice to those who seek to terrorize the region.

“Much dark propaganda against Turkey has been circulating to raise doubts about our resolve against Daesh. We have been leading in the fight against terrorism in all its forms,” he stressed, using the Arabic acronym for ISIL.

Altun also said some circles in the U.S. are “working hard” to make Washington’s partnership with Ankara “unworkable”.

“We hope a cool-headed approach that understands the true value of alliances will prevail in the end,” he added.

Amid expectations of a visit this month by Turkish President Recep Tayyip Erdogan to the U.S., Altun underlined that the leaders of the two countries would meet whenever they “see fit”.

He added: “The decision for the November visit ultimately lies with our President.”

Underlining that communication between Erdogan and Trump has been “candid”, Altun said: “They [Erdogan and Trump] will continue to discuss issues of mutual interest with the same level of openness in the future as they deem appropriate. Our strong counter-terrorism cooperation with like-minded partners can never be questioned.”

A senior Turkish official has told Reuters that Baghdadi’s sister was captured in the Azaz town of Syria, the news agency reported on Nov. 4.

The official said Baghdadi’s sister’s husband and daughter-in-law are being interrogated as well.

Rasmiya Awad, 65, was arrested in a raid near Azaz, according to the official. When captured, she was also accompanied by five children.

Baghdadi had risen from obscurity to lead the ultra-hardline group and declare himself “caliph” of all Muslims, holding sway over huge areas of Iraq and Syria from 2014-2017 before ISIL’s control was wrested away by U.S.-led coalition forces.

The group, also known as ISIS, said a successor to Baghdadi identified as Abu Ibrahim al-Hashemi al-Quraishi had been appointed.

World leaders welcomed his death, but they and security experts warned that the group, which carried out atrocities against religious minorities and horrified most Muslims, remained a security threat in Syria and beyond.