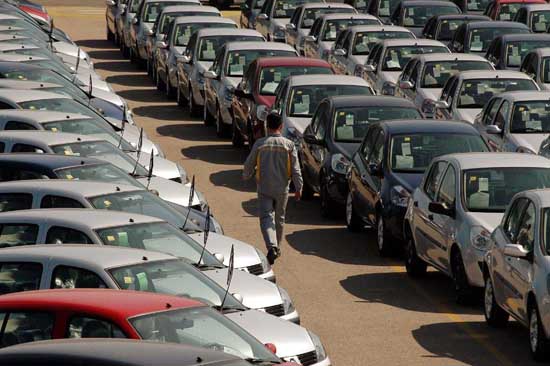 A total of 49,075 automobiles were sold last month, according to a report from the association.

Meanwhile, in the first ten months of this year, the passenger car and light commercial vehicle total market narrowed 31.88% on an annual basis to 330,384.

Meanwhile, Turkey’s automotive industry exports reached $25.4 billion in the first 10 months of this year, according to an exporters association.

The country’s exports were around $2.5 billion per month on average during the same period, Uludağ Automotive Industry Exporters’ Association announced late on Nov. 3.

Turkish automotive industry’s exports were also $2.8 billion in October, down 3.5% versus the same month last year.

Baran Çelik, the head of the association, said Turkey’s automotive exports rose 63% to Commonwealth of the Independent States and 43% to the Middle Eastern countries, while dropped by 5% to the EU, which constituted 76.5% of the sectors’ exports.

“We recorded a rise in the main product groups in October. But the decline in motor vehicles for goods transport and tow trucks adversely affected the month’s performance,” he noted.

The sector ranked the first by taking a 17% share from the country’s overall exports in the month, he stressed.

In October, car exports, which constituted 43% of automotive exports, rose 1% to $1.2 billion, while supply industry exports climbed 3% to $966 million.

Exports of motor vehicles for goods transport saw a decline of 18% to stand at $388 million, and tow trucks’ exports dropped 64% year-on-year in the month.

Germany was the top destination for the automotive exports in October with $398 million, followed by France ($288 million) and Italy ($282 million).