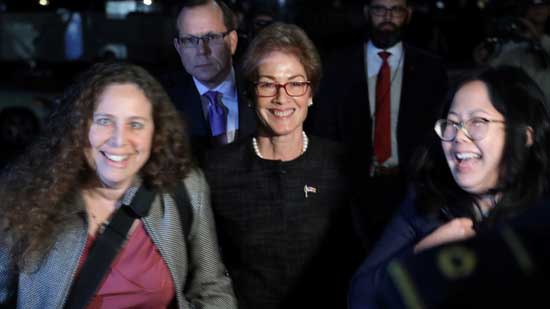 The highlights of impeachment testimony paint Ambassador Marie Yovanovitch as a victim of character assassination by corrupt Ukrainians and US President Donald Trump. We read through all 317 pages to see what’s actually inside.

Yovanovitch testified before the House Intelligence Committee last month, and the transcript of the all-day proceedings was among the first made public by Chairman Adam Schiff (D-California) on Monday. Schiff’s office also released a nine-page“highlights” reel, which most reporters were all too happy to focus on.

Rather than accept the pre-sliced serving of this particular political sausage, we rolled up our sleeves and got to reading the whole thing ourselves. The final result is far less dramatic. It reveals a diplomat who made a whole lot of assumptions and retrospective conclusions based on media reporting. Her most frequently used phrase was “you know” – but she didn’t actually know a whole lot at all.

In the opening remarks that she ended up sharing with the Washington Post – despite the hearing being held behind locked doors – Yovanovitch denied being anti-Trump, favoring Ukrainian President Petro Poroshenko, or ever suggesting to anyone in Ukraine to refrain from prosecuting corruption.

She described her ouster as “based, as far as I can tell, on unfounded and false claims by people with clearly questionable motives.“ (p. 23)

Yovanovitch testified that in February, she was warned about Trump’s attorney Rudy Giuliani scheming behind her back with two Ukrainian-American businessmen – naming them as Lev Parnas and Igor Fruman (p. 28). The man who warned her was Interior Minister Arsen Avakov (p.43) – one of the rare unchanging fixtures in Kiev who has run the country’s police since the February 2014 coup.

She named now-former prosecutor Yury Lutsenko as one of the people who schemed to get rid of her, but could not explain why there was never any US pressure to get him fired – as there had been in the case of his predecessor Viktor Shokin, who reportedly investigated the company that had hired VP Joe Biden’s son onto its board of directors.

“We also had more leverage before. I mean, this was not easy. President Poroshenko and Mr. Shokin go way back. In fact, I think they are godfathers to each other’s children. So this was, you know, this was a big deal. But we had assistance, as did the IMF, that we could condition,” she said (p. 103). Shokhin was fired in March 2016, months before Yovanovitch was confirmed as US ambassador to Kiev.

Yovanovich did not seem to understand that in the famous July 25 phone call between Trump and Ukrainian President Volodymyr Zelensky, the US president was referring to Shokin – and Biden’s public boast about getting him fired – and not Lutsenko. Which is interesting, because she also revealed she knew about the call before the general public.

Namely, at one point Yovanovich told members of Congress that a State Department official named George Kent had told her about the call “weeks before” it was made public, but could not give the exact date, or even what he said beyond “some information.” (p.206) Kent supposedly did not mention that her name came up in the discussion, which several Republicans on the committee found hard to believe.

Another incredulous bit of her testimony was that she never contacted Lutsenko after his March 2019 interview with The Hill – in which he accused her of giving him a “do not prosecute” list, a claim he later recanted – because “I didn’t think there would have been any point in that.”

Yovanovitch used the same phrasing to explain why she never bothered to inquire about the exact reasons for her abrupt recall in May.

“I think there was just a general assumption that just must have had to do with the information that Mr. Lutsenko provided to Mr. Giuliani,” she said. “There just didn’t seem to be much point.” (p.129)

Much ado was made about two of Schiff’s highlights, robbed of context from the actual testimony. One mentioned that Secretary of State Mike Pompeo “or perhaps somebody around him” would call Fox News host Sean Hannity to see what was going on – except it was not about her recall, but about attacks on her in April, and to demand that Hannity either present evidence against Yovanovitch or keep quiet (p.117).

The other, about Ambassador Gordon Sondland’s advice to “support President Trump” in reaction to Lutsenko’s claims, was actually walked back by Yovanovitch herself.

“I mean, he may not have used the words ‘support President Trump,’ but he said: You know the President. WeIl, maybe you don’t know him personally, but you know, you know, the sorts of things that he likes. You know, go out there battling aggressively and, you know, praise him or support him,” is how she clarified it (p. 306).

While it does reveal to what extent Ukraine is dependent on the US, or to what extent the professional bureaucrats in Washington see themselves as not just guardians but creators of US policy, Yovanovitch’s testimony does not in any way incriminate Trump or move the ball on impeachment. In that respect, the slog through 300 pages of transcripts has been much ado about nothing.