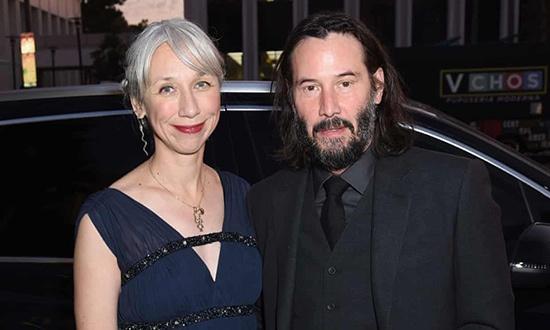 The actor has been pictured with the artist Alexandra Grant – the first time he has ever been photographed on the red carpet with a girlfriend. Will it stop fans like me swooning? Not a chance

When I saw the pictures of Greta Thunberg hanging out with Leonardo DiCaprio, I was a little worried. She would be young even for him. I know he cares about the climate emergency and is a great actor, but he is a modeliser who, despite his advancing years, is still yet to have a relationship with a woman over the age of 25.

So the news that Keanu Reeves was pictured with a woman said to be his new girlfriend, the artist Alexandra Grant, aged 46, has left me kind of thrilled. They look lovely and happy. Apparently, he has never posed with a girlfriend on the red carpet before, so this suggests a serious relationship. So, yes, I am thrilled. Even though my own love for Reeves is special. Pure and unsullied (although I did once write a piece in a magazine that featured him as the cover star and bore the legend “Dumb, young and full of come”).

Of course, Reeves is not so dumb. From My Own Private Idaho to Point Break to Bill and Ted’s Excellent Adventure to The Matrix, those of us who adore Keanu will not even bother with the conversation about whether he is a good actor. Can you imagine any one else in those roles? You can’t. See him play against type in the dire The Neon Demon and tell me he can’t act.

Reeves’s backstory belies his seeming ease and charm. Born in Beirut, he would later go on to meet Jennifer Syme, who in 1999 gave birth to their daughter Ava, who was stillborn. Syme later died in a car crash. His sister, Kim, underwent a 10-year battle with leukemia. His friend River Phoenix died of an overdose. He has spoken of the pain of loss transforming into memory where he finds solace. He has given away millions of dollars for cancer research. “Grief changes shape, but it never ends,” he once observed.

The internet is awash with stories of him being a good guy doing good things for ordinary people. Buying an ice-cream at a cinema so that a starstruck cashier could get his autograph. Sharing a minivan to Los Angeles with fellow passengers after a plane had made an emergency landing, entertaining them all along the way. He has been praised for not touching women in photographs – and being mindful of their personal space. There are memes of him alone, eating a sandwich. Maybe he is alone – or maybe his private life is simply private. Good for him.

We who are not chosen for the red carpet want Reeves to be happy. And as for getting the face you deserve, well … just think about the fact that he is the same age as Nigel Farage.

So, yeah, I am really thrilled he has found a seemingly wonderful woman. My love, however, remains true and I am sure Reeves knows this because we could all do with someone like him in our lives. “Be excellent to each other,” as one of his characters has said. Reeves, when asked how he stayed so grounded, replied: “The ground is very close and we walk on it every day.” And he doesn’t put a foot wrong. It’s glorious to see him happy with a grey-haired woman. So please don’t mind us still swooning. Out of sheer respect, obviously.