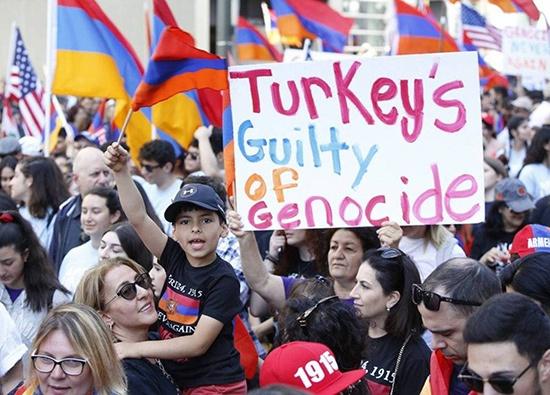 The systematic massacre of over one and a half million Armenians in the hands of the Ottoman Turks from 1915 to 1923 has been recognized as genocide by over two dozen countries and nearly all US states.

“Huge crowds of Armenian Americans march during an annual commemoration of the deaths of 1.5 million Armenians under the Ottoman Empire in Los Angeles on April 24, 2019. (AP Photo)

BEIRUT: The US Congress, fearful of arousing tensions with its military ally, Turkey, had been holding back from recognizing the Armenian genocide until last Tuesday, when the Armenian Genocide recognition resolution H. Res.296 passed overwhelmingly by a vote of 405 to 11.

However, With the Turkish invasion of northern Syria last month, risking the lives of the Kurdish ethnic minority group, US Congress reconsidered its past habit of ignoring the Armenian Genocide recognition.

“Recent attacks by the Turkish military against the Kurdish people are a stark reminder of the danger in our own time,” said House Speaker Nancy Pelosi.

Along with the global Armenian community, Lebanese Armenians saluted the US Congress for finally passing the resolution that recognizes the Armenian Genocide of 1915, regardless of its political motives.

To get their take on the matter, Annahar interviewed several members of the Armenian ethnic group which, according to a 2018 study, constitutes 4% of the Lebanese population.

For Yeghia Tashjian, Regional Analyst and Public Policy and International Affairs graduate, the recognition of the Armenian Genocide by the Congress and holding Turkey accountable for the atrocities committed is “a vital step.”

Tashjian added: “Even though the Senate has not yet voted and the President has not yet signed it, and even though it is clear that the Genocide is being used as a ‘political card’ against Turkey by the US, we are grateful that the resolution passed in favor of the Armenian history.”

With deportation being one of the striking realities of the Armenian Genocide, the Armenian diaspora spread out to all corners of the world, and many survivors ended up in the United States.

The Armenian Assembly of America and the Armenian National Committee of America (ANCA) have been campaigning for the recognition of their history by the US government for many decades. Congressional committees have repeatedly approved all Genocide-related resolutions drafted by pro-Armenian legislators. However, former US administrations have opposed the resolutions reaching the House or Senate floor to avoid damaging US-Turkish ties.

Turkey quickly reacted to the House’s acceptance of the Armenian Genocide resolution and called it a “meaningless political step,” which will inflict disruption upon US interests at “an extremely fragile time in terms of the international and regional security.”

Nevertheless, Capitol Hill and the international Armenian community celebrate the passage of the long-anticipated resolution.

Another Armenian residing in Lebanon, Educator and Activist Aram Karadaghlian, said: “The passage of the resolution is a big blow for Turkey that not only continues to deny its historical crime, but that also still pursues criminal policy in the Middle East.”

“It is a shame that the adopted resolution is not legally binding,” Karadaghlian continued, “However, I am sure that it will constitute a moral pressure on Turkey to recognize the crime of genocide sooner or later.”

For Doctor Liza Bastadjian, the passed resolution, which “further effectively implies that the US Congress recognizes the Armenian Genocide as a historical fact,” is a “victory for justice, in spite of its political nature.”

Salpy Ganimian, American University of Beirut graduate and genocide activist, told Annahar that the recognition of the Armenian Genocide by the US is a “long-awaited step, which will help towards its recognition by greater bodies: the Senate and President Trump.”

The systematic massacre of over one and a half million Armenians in the hands of the Ottoman Turks from 1915 to 1923 has been recognized as genocide by over two dozen countries and nearly all US states.

However, some governments have eschewed from officially calling the mass killings “genocide” to not endanger their political ties with Turkey, which, along with the government of Azerbaijan, threatens economic and diplomatic consequences to the genocide-recognizing nations.