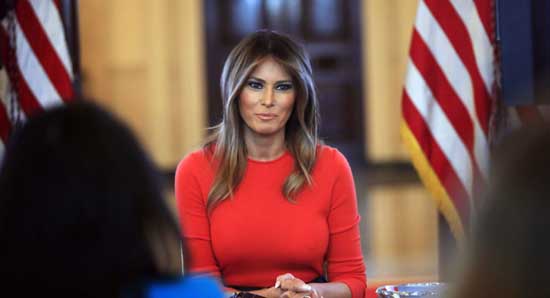 The visit to the Boston Medical Centre, which is known to provide Medicaid-financed treatment for a great deal of immigrants is part of Melania Trump’s landmark Be Best social initiative, which among other things is dedicated to assisting pregnant women and babies born with health issues.

An intense discussion involving a protest in front of the hospital premises appears to be turning a non-partisan event into a controversy around White House policies as a whole. Roughly 250 people working at the Boston Medical Centre are protesting a scheduled visit by First Lady Melania Trump, The Boston Globe reported. The appearance is set to focus on a hospital programme geared toward babies suffering from drug exposure while in the womb.

The opponents – family physicians, social workers, and administrative employees among them – assumed that a photo opportunity highlighting BMC’s work with ailing little children could send the wrong message, primarily to immigrants worried about the Trump administration’s policy prerogatives, who would then prefer to abstain from turning to the said medical institution for help.

Cecilia T. Girard, a nurse midwife who immigrated to the US from Ecuador, was among those who expressed concern about her being deemed as having links to the party in the White House.

“If they thought that my affiliation was with somebody who promotes such division and promotes the hatred of immigrants, I’m sure that they’re not going to be asking to come to see me to take care of them”, said Cecilia T. Girard.

According to some employees, BMC, one of the largest hospitals in New England, treats an especially large number of low-income patients on Medicaid, as well as immigrants who are so worried about deportations that they have been missing appointments.

Protest organisers said they sent out a letter last week asking to cancel the top-profile visit, with employees planning a late-morning demonstration in front of the hospital on Wednesday.

President and chief executive Kate Walsh, who met about 75 people to talk the matter over on Monday, argued in response that Melania Trump’s visit will provide invaluable and well-deserved recognition for an innovative programme they are pursuing in their institution.

Walsh said she hopes “the visit will be a unique opportunity to share our values of respect and inclusion with federal leaders whose policies have a significant impact on the vulnerable populations we are dedicated to serving”, her email sent Tuesday to 6,000 employees reads.

She further addressed the issue of government insurance, saying two-thirds of their patients have “some form” of it.

“Our health plan is the largest participant in the state’s Medicaid accountable care organisation”, Walsh went on stressing that “the opportunity to highlight the innovative work we are doing is critical to ensuring that we are able to continue to deliver on our mission well into the future”, the hospital head rounded off.

FLOTUS’s visit to Boston comes as part of her “Be Best” initiative, which entails boosted attention and work on issues including opioid addiction in children and bullying.

More specifically, the visit would focus on the Cuddling Assists in Lowering Maternal and Infant Stress — or CALM — programme that uses volunteers to help comfort babies born with opioid dependency, according to a White House statement.

After a short briefing on other programmes aimed at pregnant women with substance abuse issues and their babies, FLOTUS is scheduled to tour the hospital’s pediatric care unit “to see firsthand how these programmes are implemented and meet with the children and families who have been successfully treated”, the White House said.