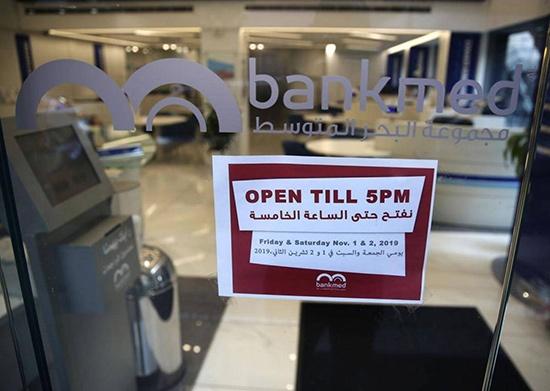 In a bid to slash risk-taking and rein in credit to conserve liquidity, banks have seemingly taken a more conservative approach while showing extreme reluctance in lending companies and merchants.

After an unprecedented shutdown lasting 12 days, Lebanon’s banks reopened late last week and seemingly mitigated what could have been a catastrophic day.

Concerns over a possible bank run were eased after a number of banks implemented soft capital controls mollifying a nationwide panic.

But in a bid to slash risk-taking and rein in credit to conserve liquidity, banks have seemingly taken a more conservative approach while showing extreme reluctance in lending companies and merchants.

A number of statements issued by banks to clients and obtained by Annahar point to a freeze in lending until further notice.

The decision has sparked concern as many companies will be unable to maintain imports of products, both basic and luxury goods. Wheat, oil and medicine imports are secured after the Central Bank issued a circular last month to supply the required dollar amounts.

“Everything else is on hold until a decision from the Association of banks is taken,” a prominent banker tells Annahar.

It remains to be seen how long merchants and traders can stave off the credit crunch before sounding the alarm.

Prior to the eruption of mass protests, now in their third week, banks had already put in place soft capital controls by limiting cash withdrawals to $1000 per day depending on the bank.

Small, mid-sized and large businesses had all faced a squeeze on credit, which is bound to further shrink economic growth, El Hokayem says.

Lebanon’s economic growth is already hovering near the one percent mark as a result of economic policies that stifled investment, incentivized the rentier model while accumulating public debt equal to around 150 percent of GDP.

Its budget deficit has also ballooned to around 8 percent of GDP, despite a series of austerity measures, with officials scrambling to defend the Lira peg which has been under immense pressure in recent months.

The Lira has been pegged to the dollar at a rate of 1500 pounds to $1, with traders finding it extremely difficult to secure dollars to pay international suppliers. This has caused a surge in black market rates, which now trade the dollar at around 1700 LBP.

Origins of the crisis

The crisis, says El Hokayem, can be traced back to the recent drop in Brent oil prices which recorded their lowest average in 2016. The average of $46 in 2016 prompted a number of Gulf states to decrease spending while the purchasing power of Lebanese expats, who retain a flow of remittances, plummetted.

“Three consecutive years of very low price averages from 2015 till 2017 were bound to be devastating for the Lebanese economy,” El Hokayem says, noting that historical data suggest a direct link between the drop in oil prices and the decline in capital inflows to Lebanon with a time lag of 20 months.

The Central Bank then found itself at a crossroads, El Hokayem says, faced with either having to defend the peg or the real estate market. Instead, the Central Bank seemingly threw its weight behind the real estate market, offering subsidized loans of up to $800,000. These amounts essentially subsidized more expensive properties and by default lent help to individuals that did not necessarily require financing.

“This decision subsidized one lavish apartment instead of subsidizing four less expensive apartments,” El Hokayem says. “Evidently, the funds ran out much quicker and first time home buyers who really needed help from the government were left to fend for themselves,” he says.

This, coupled with a drop in remittances from 23 percent of the country’s GDP in 2016 to 12.8 in 2018, has made it increasingly difficult for Lebanon to maintain its monetary stability and fixed exchange rate system.

The central bank is now taking preemptive measures to defend the peg, El Hokayem says, through decreasing imports which limits the outflow of dollars. Another is limiting cash withdrawals, with one of Lebanon’s leading banks capping monthly withdrawals at $3,000 for deposits of up to $50,000 according to a memo obtained by Annahar. This figure increases in conjunction with the size of deposits, reaching $20,000 for amounts above $5 million.

Commercial banks are also only allowing transfers abroad in cases such as payments to family members, for healthcare or loan payments, making it harder to move funds overseas and convert them into foreign currency.

This is being done in a decentralized manner, with each commercial bank left to implement its own mechanism, as a formal decision from the Central Bank would need to be accompanied by a vote in Parliament.

The measures being taken by commercial banks, El Hokayem says, are seen as an attempt to control the flight of capital, curb dollars flowing out of the country and limit the withdrawal of excessive cash.

This is a double-edged sword, however, helping decrease Lebanon’s trade deficit which was recorded at $8.04 billion in the first half of 2019. In August 2019, Lebanon recorded a trade deficit of $1.13 billion.

In the first five months of 2018, Lebanon’s trade deficit soared to around $5 billion, an amount that surpassed the total deficit recorded over the previous year.

In fact, the deficit would have been negative for eight consecutive years, had it not registered a small surplus in 2016 due to swap operations undertaken by the Central Bank.

“Limiting imports would slash this deficit but it would also lead to a contraction of the economy,” El Hokayem says.

Protestors have called on political leaders to form an independent, technocrat government comprised of industry experts capable of keeping Lebanon’s economy from further trending in the wrong direction while implementing the necessary reforms.

The implementation of these key reforms, notably to the state-owned electricity sector and other budgetary and sectoral reforms, is paramount for Lebanon finally easing international hesitation to release the $11 billion soft loan package.

In 2008, the devastating sub mortgage crisis proved to be Lebanon’s saving grace after it attracted substantial amounts of dollar inflows to the small Mediterranean country.

“Will it be CEDRE, exports, remittances or other foreign direct investments that inject Lebanon with much-needed dollars,” El Hokayem asks.

The Central Bank is also bracing for a possible credit rating downgrade of local lenders, instructing them to raise their capital by 20 percent by June and refrain from distributing dividends for 2019 to boost their liquidity.

In a circular issued Monday, Banque Du Liban asked banks to boost their high-quality capital through cash injections by 10 percent by the end of this year and another 10 percent by June 30, 2020.

This could be done through either foreign or local investments, El Hokayem says.

The peculiarity of the circular, he notes, is the specification of the Central Bank for the capital to be raised in dollars.

“This further highlights the urgency for foreign currency, which would be used for monetary policy instruments,” El Hokayem says.

On Tuesday, a day after BDL’s circular, Moody’s downgraded Lebanon’s sovereign bonds from  Caa1 to Caa2, “reflecting the increased likelihood of a debt rescheduling or other liability management exercise that may constitute a default”.