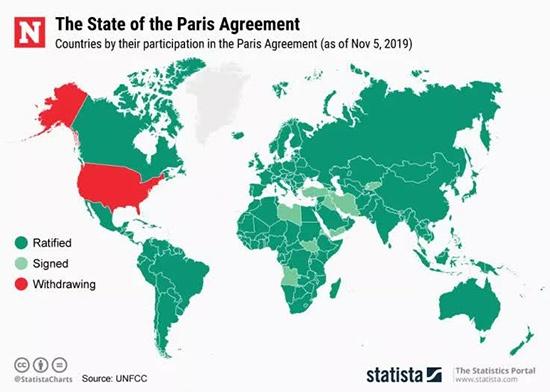 A group of two dozen state governors, mostly Democratic but also including Republicans, pledged to uphold the Paris climate agreement despite the Trump administration’s withdrawal from it.

The State Department announced on Monday that the formal process of pulling out from the historic international agreement on tackling climate change is now underway and will be completed exactly one year later, which is the day after the 2020 election.

President Donald Trump has argued that the Paris agreement, which includes separate emission-reduction targets for each country with a collective goal of keeping global temperature rises down, is unfair to the U.S. and said he would only re-enter on new terms.

The graphic below, provided by Statista, illustrates which countries have signed and ratified the Paris agreement.

Now, the Trump administration has submitted to the United Nations a formal notification of its withdrawal from the Paris agreement, which the president announced his intention to do back in June 2017, around six months after he took office.

“In response to that action, U.S. governors from California, New York and Washington State launched the United States Climate Alliance to affirm their commitment to uphold the goals of the Agreement,” said the alliance in a statement.

“We are now a bipartisan coalition of 25 governors and must stand up—once again—to reaffirm our commitment to supporting climate action and to strongly oppose the Administration’s decision to formally withdraw from the Paris Agreement. We believe all leaders have a critical responsibility to address the global climate crisis.

“The Paris Agreement is the framework for global cooperation to reduce harmful greenhouse gas emissions and address climate change. Of the roughly 187 countries that have joined the Agreement, the United States is alone in initiating a formal withdrawal.”

The alliance said it collectively represents more than half of the U.S. population and an $11.7 trillion economy, which equates to “what would be the third largest national economy in the world after those of the United States and China.”

“We are also the sixth largest global emitter of greenhouse gases. But in order to reduce emissions at the pace and scale science tells us is required, we need the federal government to join us in taking action,” the alliance statement continued.

The vast majority of those are Democrats with the exception of Maryland’s Gov. Larry Hogan, Massachusetts’ Gov. Charlie Baker, and Vermont’s Gov. Phil Scott, who are Republicans.

Puerto Rico, which is an American territory but not a state, is also listed as a member of the alliance though the governor who signed up, Ricardo Rosselló of the New Progressive Party, resigned from his position in August.

“We will continue to work with our global partners to enhance resilience to the impacts of climate change and prepare for and respond to natural disasters,” the State Department said on Monday.

“Just as we have in the past, the United States will continue to research, innovate, and grow our economy while reducing emissions and extending a helping hand to our friends and partners around the globe.”

This article was updated to include an infographic.

Correction 11/6/19: There are three Republicans among the governors, the third being Phil Scott of Vermont.